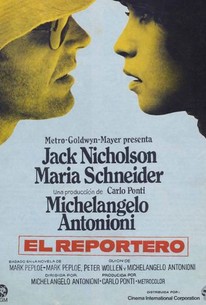 Critics Consensus: Antonioni's classic, a tale of lonely, estranged characters on a journey though the mysterious landscapes of identity, shimmers with beauty and uncertainty.

Critics Consensus: Antonioni's classic, a tale of lonely, estranged characters on a journey though the mysterious landscapes of identity, shimmers with beauty and uncertainty.

Critic Consensus: Antonioni's classic, a tale of lonely, estranged characters on a journey though the mysterious landscapes of identity, shimmers with beauty and uncertainty.

The mutual admiration between actor Jack Nicholson and director Michelangelo Antonioni resulted in the psychological drama The Passenger. Nicholson plays David Locke, a disillusioned American reporter who is sent on a grueling mission to North Africa. When he stumbles across the body of a dead man, Locke, long desirous of starting life over again, assumes the corpse's identity. He soon discovers that the man he's pretending to be is involved in gun running on behalf of a terrorist group. Making the acquaintance of a mysterious woman (Maria Schneider), he finds a kindred spirit -- a woman as "lost" as he. ~ Hal Erickson, Rovi

Chuck Mulvehill
as Robertson
View All

The Passenger is almost a masterpiece. Almost? That's because the plot, a thrillerish tangle about swapped identity in a menacing foreign country, begs for the pen of Patricia Highsmith.

Earlier Antonioni films have often seemed studied, but not this one. Its details are easy and apropos.

What in different hands would have been a bombastic psychological thriller becomes a stark study of existential alienation.

A classic of a difficult and alienating kind, but one that really does shimmer in the mind like a remembered dream.

Thanks to Luciano Tovoli's magnificent cinematography of the African desert and the arid Spanish countryside, we gain a potent sense of Locke's internal emptiness.

This Antonioni film has a hypnotic quality that arouses deep reflections within me. [Full review in Spanish]

The entire film feels like one long held breath as its characters fidget in anticipation of things they can't foresee or understand.

The Passenger, like its protagonist, wanders about in such a state of deathly boredom that watching the film is rather like taking a sleeping pill.

Michelangelo Antonioni's new film The Passenger is a visual masterpiece, frame for frame one of the most beautifully realized films in years.

This is one of the most insufferable, pretentious, and boring movies I've seen in my life. [Full Review in Spanish]

It has all the elements of an action movie but remains stubbornly, intractably static. Antonioni is more interested in emptiness, the vast, barren landscapes an externalization of the void inside our protagonist.

The Passenger is a superbly executed piece of nihilism, featuring a pre-Bucket List pre-wacky Jack Nicholson. His uninhibited, organic and quietly angry performance reminds us why he was the poster child of the 70's anti-hero movement that changed movies forever, before they changed back. He is able to make his highly implausible character switch with the dead gun runner completely relatable. His co-star Maria Schneider's spontaneity and honesty still rings resoundingly true more than thirty years later. This film has all the trappings of a mystery thriller on paper, but if you are not familiar with the Antonioni output, and require resolution and closure in your films, this film will disappoint and let you down at every turn. Instead, let it wash over you and start to get comfortable with ambiguity and randomness, as we all need to do in our lives. Ambiguity and randomness are Antonioni's big theme, running through all his films. The Passenger's selling points are the rich Spanish and African locations, shot in an objective and unromantic style, and the true and honest acting of its two leads. It's very long, but that's part of its beauty. The supporting plot points, including that of the quest of Nicholson's boss and wife to find him, do not add much to the film, especially when you realize how irrelevant they are to the final impact of the film. They seem to be Antonioni's device to suck us into getting caught up in a chase film, only to have our finely honed film going expectations utterly shattered on those craggy Spanish rocks. The long seven minute single shot that nearly ends the film (there's a quick shot afterwards) is quietly tragic and will haunt most viewers for all of their film going days. I re-screened the film after 20 years and it has never left me.

This is basically the type of film that only film professors like, it seems. It's not bad, but definitely not for everyone. Maybe I could have gotten into it more had it been a little less slow. I mena, it is a 70s nicholson film, so it definitely has that going for it. The concept is intriguing, but it would have been better with a little more developed plot. I liked the camera work, but the graininess of the film stock kind of bugged me. Like others, I'm floored by the second to last shot: a 7 minute long take/tracking shot that, even though I read how they pulled it off, still blows my mind. See it if you're curious, but I wouldn't really force this upon anyone. It had some good ideas, but just couldn't have been done in a less pretentious and more accessible manner.

A brilliant drama/adventure movie from Antonioni, and starring Nicholson. I loved it, and I highly recommend it.