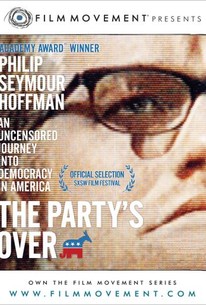 Actors and political activists come together to take a long, hard look at the State of the Union during the 2000 U.S. Presidential election in this documentary, a follow-up to 1993's The Last Party, in which actor Robert Downey Jr. followed the 1992 presidential campaign. In The Last Party 2000, with Robert Downey Jr. unavailable due to drug convictions (he does make a brief appearance, and his legal problems as well as the current state of American drug laws are discussed), Philip Seymour Hoffman takes his place as he visits the 2000 Democratic and Republican National Conventions and talks to politicians and activists both famous and obscure as a pitched battle is fought between supporters of democratic candidate Al Gore, republican nominee George W. Bush, and the many voices who believed neither candidate represented a worthwhile or reasonable choice. Along with Downey and Hoffman, celebrities speaking out on the issues in this film include Courtney Love, Rosie O'Donnell, Reese Witherspoon, and David Crosby; the rock band Stone Temple Pilots also appear at a political rally. The Last Party 2000 was directed by actor and musician Donovan Leitch, who served as a producer on the first film.

Critic Reviews for The Party's Over

The breadth of subjects covered precludes any response other than nebulous discontent.

Ending well before 9/11, the film may offer a quaint enough portrait of politics as usual at the turn of the new century, though one that hardly seems helpful in the face of the world's new realities.

Apart from the obvious problem that findings from this period are already dated, the scatter-shot approach of filmmakers Donovan Leitch and Rebecca Chaiklin gives too many issues too little time.

If it accomplishes anything at all -- and it's dubious -- The Party's Over proves what a fragmentalized, incompetent and inarticulate thing the Left in this country has become.

Highly entertaining and thought-provoking, but also frustrating -- which, ultimately, might be the point.

It's not that their arguments don't have weight, but by throwing out the balance, the filmmakers undermine their own position badly.

Its everything-but-the-kitchen-sink approach to liberal politics is its undoing.

Leitch's previous foray into political documentary, the sloppy, anarchic 'The Last Party' was overwhelmed by the juvenile antics of its host, Robert Downey Jr., Hoffman establishes a more sober tone, though the new film isn't without its lighter moments.

Those seeking anything resembling a real discussion of the issues had best seek elsewhere.

Hoffman's presence as a familiar face gives us a personality to latch onto, that of the man whose support in countless fictional films we relied upon.

An amazingly candid and insightful look at the contemporary American political process.

Audience Reviews for The Party's Over

There are no featured audience reviews yet. Click the link below to see what others say about The Party's Over!

The Party's Over Quotes