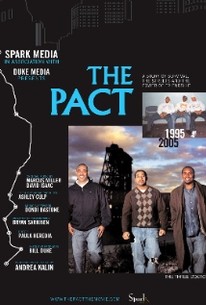 Andrea Kalin's documentary The Pact relays the inspiring account of three young African American men from the inner-city projects - Rameck Hunt, George Jenkins and Sampson Davis - who vowed to collectively resist the crime, poverty and drug trade that claimed the lives of so many in the neighborhoods of their youth. The three friends banded together and promised to do anything and everything necessary to each fight their way through undergraduate work and medical school, helping and supporting each other along the way. Years later, with their goals accomplished, the men returned to the communities as accredited physicians and set up inner-city practices, not only aiding residents of the ghetto on a grass-roots level, but inspiring youngsters to stay off of the streets and out of drugs, and to each accomplish their full potential. Kalin filters the account through the eyes of a young man immeasurably touched by the physicians.

Critic Reviews for The Pact

There are no critic reviews yet for The Pact. Keep checking Rotten Tomatoes for updates!

There are no featured reviews for The Pact at this time.