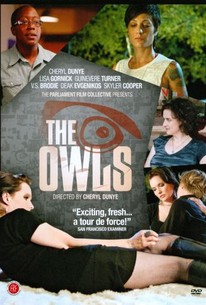 Pioneering feminist filmmaker Cheryl Dunye directed this independent drama about four women struggling to make sense of their past and live down one particular evening. Iris (Guinevere Turner) and M.J. (V.S. Brodie) are a Lesbian couple who live in Los Angeles, while their friends Lily (Lisa Gornick) and Carol (Cheryl Dunye) are another couple with a home nearby. Iris, M.J. and Lily were all members of a once-successful all-female rock band, but now that they're middle aged, they're in an uncomfortable position where they feel culture and politics are passing them by while a new generation of women is hardly aware of the struggles of the 1960s, 70s and 80s. A year before, the two couples were at Iris and M.J.'s house for a party when a younger guest, Cricket (Deak Evgenikos), got into a drunken argument; the cross words turned into a fight, and Cricket was accidentally killed. The four women buried Cricket's body and have been keeping the matter a secret, though fliers posted by Cricket's friends suggest they're still looking for her. One evening, a strong, androgynous young woman named Skye (Skyler Cooper) pays a visit to Lily and Carol's home, and Carol, clearly attracted, lets her in even though they've never met. However, Carol soon realizes she's made a mistake -- Skye clearly believes Carol knows something about Cricket's disappearance, and isn't about to leave until the finds out the truth. The Owls (the title is meant to be an acronym for "Older, Wiser Lesbians") was an official selection at the 2010 Berlin International Film Festival.

Deak Evgenikos
as Cricket
View All

Critic Reviews for The Owls

Cruelly ahead of its time...

...uses a deliberately disjunctive, fourth-wall-breaking approach to telling the story of four 40-something lesbians... bound together by a violent incident in their past.

Audience Reviews for The Owls

There are no featured audience reviews yet. Click the link below to see what others say about The Owls!