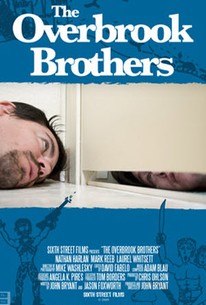 Home may be where the heart is, but it's a constant source of aggravation for one hapless guy in this independent comedy. Jason (Nathan Harlan) and Todd (Mark Reeb) are brothers, but like many siblings they don't get along very well, and the two have been battling one another as far back as they can remember. With Christmas around the corner, Jason comes home for yet another tense family reunion, but during an argument with Todd, he's told a long-kept family secret that explains why he's been regarded as the black sheep of the family for so long. Startled by the news, Jason hops in his car and sets out to dig up the truth about himself and his family. The first feature film from writer and director John Bryant The Overbrook Brothers received its world premiere as an official selection at the 2009 South by Southwest Film Festival.

Dicky Garrison
as Knight on Horseback #1

Tommy Dippel
as Knight on Horseback #2

Ellen Dolan
as Nurse
View All

Critic Reviews for The Overbrook Brothers

There are no critic reviews yet for The Overbrook Brothers. Keep checking Rotten Tomatoes for updates!

Audience Reviews for The Overbrook Brothers

I guess if I got anything out of this movie, I learned that you don't have to be blood related to be brothers