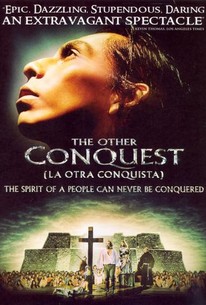 The Other Conquest Photos

On Nov. 8, 1519, the Spanish conqueror Hernando Cortés and his small army rode into the Aztec capital of the vast Mexican Empire, where they were welcomed by the Emperor Moctezuma. Within two years, the Aztec civilization was in a state of orphanage, the survivors having lost their families, homes, language, temples... and gods.

Lourdes Villareal
as Cihuacóatl
View All

Critic Reviews for The Other Conquest

In his bravura feature debut, [Salvador] Carrasco has created nothing less than a dazzling vision of the birth of a uniquely Mexican religion born of the searing fusion of Catholic and Aztec deities.

[Director] Carrasco uses shadows and mirrors to create effects he has no actual budget for. The lack of money shows on-screen but is cleverly hidden by the director's genius for making us care about his story so much that we forgive all else.

An incendiary mix of politics, religion, war, violence and personal turbulence -- not an easy film, but a complicated work of art.

A grand mural of trauma, with superb colors, a great escape scene and fertile myth-probing about how masters and vassals together forged the hot core of Mexican Catholicism.

Caught between efforts to redress Eurocentric accounts of the conquest of Mexico and a tendency to slide into old-movie melodramatics, Carrasco's film is often gorgeous, never less than entertaining and occasionally moving.

Carrasco delivers his message with all the grace of Cortés.

This is a film that dares to look at faith from a fresh perspective. The fact that the film is back in theaters at all is a near-miracle.

A marvelous vision: at once spectacle, history lesson, and potent psychological drama.

A dizzying intellectual experience that dares to tread where few films have in terms of religion, war and the curious contradictions that ensue when one group of humans conquers another.

The drama doesn't work, and the film ends up feeling more like a history museum display.

Audience Reviews for The Other Conquest

There are no featured audience reviews yet. Click the link below to see what others say about The Other Conquest!

The Other Conquest Quotes