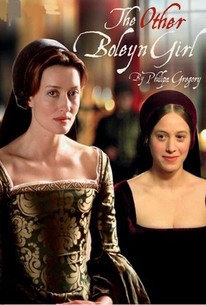 U.K. documentary filmmaker Philippa Lowthorpe brings an experimental approach to the costume drama The Other Boleyn Girl, produced for television by BBC Films. Shot with a handheld digital camera, the film is a largely improvised project based on the best-selling novel by Philippa Gregory. In 16th century England, the recently married Mary Boleyn (Natascha McElhone) is encouraged to have an affair with the notorious King Henry VIII (Jared Harris) in order to improve the power of her family. When she gets pregnant, the king turns his attention to her sister Anne Boleyn (Jodhi May). Learning to play by the degrading rules of the king's court, Anne conspires with her brother George (Steven Mackintosh) to produce a male heir. The Other Boleyn Girl first aired on BBC Two March 28, 2003. ~ Andrea LeVasseur, Rovi

Jodhi May
as Anne Boleyn

Yolanda Vasquez
as Katherine of Aragon

Critic Reviews for The Other Boleyn Girl

There are no critic reviews yet for The Other Boleyn Girl. Keep checking Rotten Tomatoes for updates!

Audience Reviews for The Other Boleyn Girl

In terms of accuracy to the original plot of the novel, this version is much better than the recent film. Events are trucated too, but there are few if any continuity errors and all loose ends are tied up. However, this version is quite low budget - resulting in sets and props that look quite rural and too plain for wealthy homes of the period, as Tudor nobility were rather into showing off their wealth. So the two have their different strengths and weaknesses. If you want a version that sticks more to the novel, this one is for you. If however you want a sense of the wealth and glamour of the royal court, the 2008 version is better.

The Other Boleyn Girl Quotes