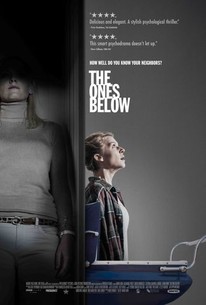 Critics Consensus: Creepy and well-crafted overall, The Ones Below marks an auspicious feature-length debut for writer-director David Farr.

Critics Consensus: Creepy and well-crafted overall, The Ones Below marks an auspicious feature-length debut for writer-director David Farr.

Critic Consensus: Creepy and well-crafted overall, The Ones Below marks an auspicious feature-length debut for writer-director David Farr.

The Ones Below Videos

The Ones Below Photos

THE ONES BELOW is the debut feature from writer-director David Farr (screenwriter of HANNA and AMC's THE NIGHT MANAGER), starring the ensemble cast of Clémence Poésy (BIRDSONG, THE TUNNEL, HARRY POTTER), David Morrissey (THE WALKING DEAD, RED RIDING, WELCOME TO THE PUNCH) Stephen Campbell Moore (COMPLICIT, HISTORY BOYS, ASHES TO ASHES), and Laura Birn (THE PURGE, PEARLS AND PIGS, HEART OF A LION). Blending an element of urban dread with an edgy sense of paranoia, THE ONES BELOW follows Kate (Poésy) and Justin (Moore), a young couple in a tiny London suburb eagerly awaiting the birth of their first child. But when the enigmatic Teresa (Bim) and Jon (Morrissey) move into the apartment downstairs, the parents-to-be soon become involved in a psychological battle of wills with the new tenants.

News & Interviews for The Ones Below

View All The Ones Below News

Critic Reviews for The Ones Below

The film's ultimate reveal is hardly shocking, and that the film spends a gratuitous amount time unspooling it long after it's clear what has gone down feels indulgent and unearned.

There are elements of The Hand That Rocks the Cradle here, but Mr. Farr and an excellent cast of four give it fluidity and balance without the familiar "gotcha."

Even as events turn more than a tad preposterous with twists that seem not just predictable but inevitable, Farr keeps a handle on the tension and tone, which keeps us hooked.

There's much to admire in the thriller "The Ones Below."

Capably delivering on its ominous title, "The Ones Below" is a masterfully calibrated psychological thriller that deviously plays off of anxieties surrounding contemporary notions of domesticity and identity.

There's plenty to enjoy in the film, starting with a pair of affecting performances by Clémence Poésy and Laura Birn, and ending with a perverse twist on the notion of blissful parenthood.

There are enjoyable moments of unexpected humour (general social awkwardness) as well a nice tautness to the plot's proceedings. Ultimately, however, the film's rather predictable yet overblown ending takes the wind out of its 'serious thriller' sails.

Elements of pastiche aside, Farr's suspense-filled first endeavor behind the camera shows signs of genuine promise.

It's that plausibility factor that makes The Ones Below so effective.

Only a strong cast make it halfway worthwhile.

This is one of those nails scratching a blackboard suspense stories. It is the kind of film where terrible things happen, and you know more terrible things are going to happen. You just don't know exactly what, or when.

A quality effort that unsettles even as it gets silly, with Poésy's convincingly spooked performance holding things together when subtlety finally flees the party.

Audience Reviews for The Ones Below

The film has that oddness that unnerves you at times but the thriller is very simplistic in design. I just couldn't get into the film, it is well acted but the plotting is very tiresome and hard to get into. The film clings to this one event but it has so many flaws in the plot you almost want to throw something at the TV at the conclusion. David Farr has a keen eye for filmmaking but as a character driven thriller I felt this didn't offer much to the genre. The creepiness just never delivered for me, the likable and loveable neighbours never felt that evil to me. 28-01-2018.

Where does one even begin a review of this movie without absolutely spoiling everything? Just as a fair warning, however, I will spoil everything at a certain point in this review so, if you haven't seen the movie and are actually interested in it, then just don't read this review. It won't even be the best of its kind you read on here, so you're really not missing out on anything. Anyway, I guess if I were starting off, I'd say that this is a very, very good movie. It's one of those that keeps you guessing right until the very end. Is it the most unpredictable movie in existence? No, not really. Because there's either one of two options. Either Kate is suffering from some postpartum induced paranoia of the couple who lives in the apartment below theirs plotting something against her, her husband and her newborn. Or Jon and Theresa, the ones below as it were, really were trying to fuck Kate and Justin over after they held them responsible for the loss of their child after an accident. There's not many options, but the movie does a good job at not revealing too much of its own cards to tip your opinion of what might actually be happening one way or the other. You can see both sides of the equation. You can see how Jon and Theresa's odd behavior would lead Kate to believe that they are up to something. But you can also see that since Kate give birth, she has not been in her right state of mind and her paranoia as a result of the guilt she feels for the accident that led to Theresa losing her child. Which brings us to the reveal of what actually happens. So, essentially, Jon and Theresa create this plan where they slowly ingratiate themselves in Kate and Justin's lives in small ways. Theresa offers to take care of Kate's baby in order to give her time to decompress and relax. The more Theresa offers to help the more suspicious Kate becomes. She eventually discovers that Jon and Theresa's camera is full of photos with her baby. She also finds a baby's room with a photo of Jon and Theresa acting as the child's parents. Kate calls Justin, he comes over to the apartment, where it's revealed that there were no photographs at all in the camera and the baby room was left intact as a way for Jon and Theresa to grieve the loss of their unborn baby. Of course, you're not clear, at least at this point, of what actually happened. There comes a point in the movie where Justin has to go to work. It was a fake call to get him to leave the house. Once Justin arrives home, he finds that Kate has, in fact, committed suicide and thrown their baby in the lake. It is later revealed that Jon and Theresa orchestrated all of this, they poisoned the milk that Kate drank every day. They also probably threw a cat in the river. Naturally, they took the baby with them to raise as their own, their own plot of revenge against a couple they felt was responsible for the death of their unborn child. It's actually kinda fucked up if you think about it, because there's just enough realism here to make it so that this might actually be a legitimate thing someone may try. It also works in so many ways as well. Because, the way they pulled off this plan, nobody would have ever suspected any wrongdoing and Justin will always live the rest of his life believing that his wife killed his child before killing herself. There's so many angles to this, it's quite something. But, really, there's some plot holes here. Because, let's say that the baby was indeed thrown in the lake and it drowned. Wouldn't the authorities actually look for the body? Wouldn't they have easily found out that the body thrown in the lake was not, in fact, a baby? It's one of the few plot holes in an otherwise really strong movie. One of the many things I liked about the movie was its pacing and how it built up tension and dread for its climax. Character development is quite strong. You can see how Jon and Theresa would lose sense of their faculties after the tragic death of their unborn child. Not saying that what they did was justifiable, since it was indeed just an accident, but you can see how they thought that their revenge plot was the best course of action. The acting is really damn good as well, so can't complain about that as well. Really, overall, I can't say much bad about this movie. It's not gonna be a movie that appeals to everybody, but I thought it was a damn good psychological drama. It's on Netflix, so that makes it an easier recommendation, though not everyone will enjoy it because of its slower pace.

Mediocre, and really predictable. Not a good movie.

The Ones Below Quotes