The Odd Life of Timothy Green2012 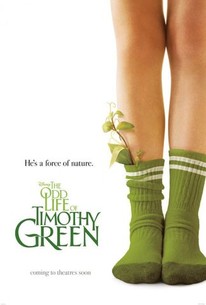 Critics Consensus: It means well, but The Odd Life of Timothy Green is ultimately too cloyingly sentimental -- and thinly scripted -- to satisfy all but the least demanding viewers.

Critics Consensus: It means well, but The Odd Life of Timothy Green is ultimately too cloyingly sentimental -- and thinly scripted -- to satisfy all but the least demanding viewers.

Critic Consensus: It means well, but The Odd Life of Timothy Green is ultimately too cloyingly sentimental -- and thinly scripted -- to satisfy all but the least demanding viewers.

Director/writer Peter Hedges brings enchantment to the screen with The Odd Life of Timothy Green, an inspiring, magical story about a happily married couple, Cindy and Jim Green (Jennifer Garner and Joel Edgerton), who can't wait to start a family but can only dream about what their child would be like. When young Timothy (CJ Adams) shows up on their doorstep one stormy night, Cindy and Jim -- and their small town of Stanleyville -- learn that sometimes the unexpected can bring some of life's greatest gifts. -- (C) Disney

Common
as Coach Cal
View All

News & Interviews for The Odd Life of Timothy Green

View All The Odd Life of Timothy Green News

Critic Reviews for The Odd Life of Timothy Green

A gooey mess, but not an entirely dislikable one.

The Odd Life Of Timothy Green made me shiver, like having a lizard crawl over your face when you're asleep.

Has ever a film battled more fruitlessly against the creepiness of its own premise than The Odd Life of Timothy Green?

The film is schmaltzy and very saccharine, so sweet it'll give you a toothache.

Although the film's ending loses some of the oomph and magical charm that CJ and his storyline of Timothy brings throughout the film... The Odd Life of Timothy Green is still "oddly" wonderful and magically charming.

A wholly magical experience - a refreshingly old fashioned fable for the young and the young at heart.

Clearly it's designed to be this heart-warming family fantasy, but I kept thinking as I watched it that the material seemed better suited for a horror film.

The Odd Life of Timothy Green is a refreshingly old-fashioned flick.

While some aspects of the story are pretty predictable, [Peter Hedges] manages to work in a few surprises and, more importantly, conjure plenty of magic and emotion along the way to a satisfying conclusion.

It's supposed to be magical and charming, of course, but it's more annoying than engaging.

Audience Reviews for The Odd Life of Timothy Green

Odd indeed. The premise of this film had me intrigued from the start, and even though the idea behind this premise even happening is bizarre and silly, I was ready to accept and view as a kid. "The Odd Life of Timothy Green" has some very solid moments, but when your film is overly sentimental to the point where you will begin rolling your eyes at it's attempt at emotion, that will hurt it very dearly. The cast is very likeable and the way of telling the story was interesting, but it just did not connect with anything going on in this film the way that I thought I was going to. The dialogue was pretty standard and the outcome seemed like the easy way out of this story, but in the end, it's a film children can enjoy, even though it's not a very good one. "The Odd Life of Timothy Green" is the definition of wasted potential.

When I saw the previews of this movie, I honestly thought that it looked kind of silly. Well..I couldn't have been more wrong. This fantasy movie was just wonderful. It was sweet, funny, charming, and a complete all around wonderfully likeable family film. If this movie doesn't warm your heart, nothing will....

"Odd Life of Timothy Green" is one of those movies where you just have to go with it, or you won't enjoy it at all. It's about a couple, Cindy(Jennifer Garner) and Jim Green(Joel Edgerton) who cannot have a child. One night in there depression of being unable to conceive, they make a list of everything they would want in a son, put it in a box and bury it in their garden. A storm comes, and boy covered in dirt with leaves on his legs, and he calls Cindy and Jim mom and dad. From their they treat him as their son, and he exudes all the qualities they wanted in a son. He enriches their lives and the lives of everyone else in their lives/town. It's a cute family Disney movie with a pretty crazy premise, and generic execution. It's fine for what it is, and like I said, you either go with it or not. I thought it was ok and worth a watch. I've seen much worse. Emily liked it and actually stayed awake for the entire thing, so I think women will dig it. Give it a shot.