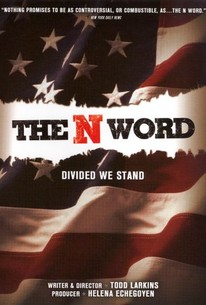 The biggest names in show business come together to offer their opinions on one of the most inflammatory words in the English language in filmmaker Todd Williams' revealing and thought-provoking documentary. In its long and complex history, the word "nigger" has gone from a cutting and derogatory racial slur to a term of endearment frequently used by African-American youth culture. Though the word has in a sense been "taken back" by the very people that it targeted, it still has the power to anger and enrage when taken out of its new context. As a variety of celebrities including Quincy Jones, Russell Simmons, George Carlin, Damon Dash, and Bryant Gumbel offer their opinions on this polarizing word, the taboo of language is broken to reveal an ever-changing society that is constantly attempting to make sense of a dark past while simultaneously attempting to build a brighter future.

Critic Reviews for The N-Word

Is it now socially acceptable to utter the N-word in polite company?

Audience Reviews for The N-Word

I had to see this documentary in college and I recommend it. It's an important film about different opinions on whether the word should be used or not.