The Nothing Factory (A Fábrica de Nada)2017 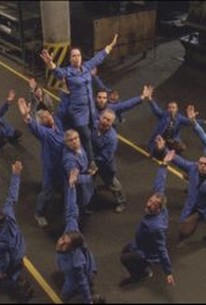 The Nothing Factory (A Fábrica de Nada) Photos

One night a group of factory workers realize that their employer is stealing its own machines and raw materials. They organize to guard the equipment and keep production from being moved elsewhere. As a form of retaliation the workers are forced to stand at their workstations doing nothing, while the negotiations for a general layoff go on. This immense pressure leads to several outbursts, as the world around them collapses. THE NOTHING FACTORY invites us to reflect on the role of work in a time when the economic crisis has become the dominant form of government. It is a hymn to disempowering impotence and a pitiable musical.

Critic Reviews for The Nothing Factory (A Fábrica de Nada)

It remains a granola-textured admixture to the end, which makes it a difficult sell. Not, perhaps, to festival audiences prepped for demandingly discursive fare, but to anyone outside those rarefied confines.

The enigmatic story is acted with sincerity and force.

A film which proves that you can fight the power while dancing at the same time.

There is gathering power as we peer into lives, conflicts and labour pains, in all senses, of a new-born industrial showdown.

A grainy, nearly three-hour opus that unexpectedly morphs from vérité-like neorealist drama into that unicorn of cinematic genres: a neorealist musical.

The film has a very human and necessary message about the working class and its needs. [Full Review in Spanish]

His portrait of the workers fighting to stay together before individual deals offered by the Company Management is tremendously human. [Full Review in Spanish]

The Nothing Factory is a gift to those of us who believe that movies should act as formal critics of society. [Full Review in Spanish]

The director manages to turn everything upside down to discuss both the rules of each film genre and society itself... [Full Review in Spanish]

The result is a passionate piece of work where a viewer has no choice, but to submerge oneself into the the workers. [Full Review in Spanish]

[Director] Pedro Pinho and his collaborators... portray all those moments of uncertainty, waiting and gatherings with documentary naturalism. [Full review in Spanish]

There are no featured reviews for The Nothing Factory (A Fábrica de Nada) at this time.

The Nothing Factory (A Fábrica de Nada) Quotes