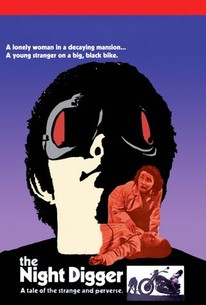 Adapted by Roald Dahl from a novel by Joy Crowley, The Road Builder is better known by its American release title: The Night Digger. Patricia Neal, then Mrs. Dahl, stars as the repressed middle-aged adopted daughter of blind and elderly Pamela Brown. Both women are drawn to Nicholas Clay, a seriously disturbed young handyman whom they shield from the authorities. Neal and Brown are particularly fascinated by Clay's mysterious nocturnal forays. When Neal decides to offer herself sexually to Clay, she learns to her horror just why Clay spends so much time outdoors at night. An eerie Bernard Herrmann score enhances the stomach-churning tension. ~ Hal Erickson, Rovi

Critic Reviews for The Night Digger (The Road Builder)

I only felt the more miserable for seeing it.

Audience Reviews for The Night Digger (The Road Builder)

There are no featured audience reviews yet. Click the link below to see what others say about The Night Digger (The Road Builder)!