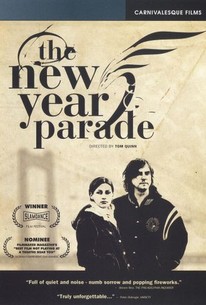 Fact merges with fiction in writer/director Tom Quinn's deeply personal tale of two teenagers struggling to make sense of their complicated family life after their mother and father decide to separate. While sixteen year-old Kat holds out hope that her parents will eventually work things out, her quiet suffering causes her to become emotionally isolated from both family and friends. Meanwhile, Kat's brother Jack not only finds himself in the difficult position of having to mediate between mom and dad, but also having to keep track of their fragmented finances. Complicating matters is the fact that Jack plays in the string band his father longs to lead to victory in Philadelphia's annual Mummer's Parade.

It blends in with the use of handheld camera and extremely naturalistic dialog culled from hours of taping the non-pro cast. The labor pays off in a strong sense of realism.

Quinn photographed his film over four years, and yet, as his own editor, has mastered what must have been hours of material into a story so convincingly embedded in the band and parade that it would have been impossible to create it just for a film.

A low-key but satisfying blend of melodrama and observant naturalism.

The seemingly improvised performances have a sweet, ragged edge, and the music swells.

There are no featured audience reviews yet. Click the link below to see what others say about The New Year Parade!