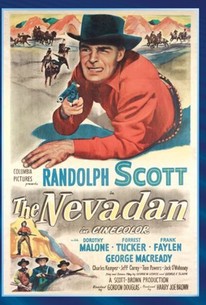 Those westerns produced by the team of star Randolph Scott and producer Harry Joe Brown tended to be several notches above the norm, and The Nevadan is no exception. Scott is cast as U.S. marshal Andrew Barkeley, who goes undercover in a federal pen to get a line on $250,000 in stolen money. Barkeley arranges for chief suspect Tom Tanner (Forrest Tucker) to escape from jail, the better to trail Tanner to the hiding place for the loot. If it were that easy, of course, the film would be over in 15 minutes. Complicating matters is avaricious rancher Edward Galt (George Macready), who also covets the stolen cash. Dorothy Malone adds "heart interest" as Galt's daughter. The chase and fistfight scenes are well-integrated into the suspenseful screenplay. The director was Gordon Douglas, an efficient craftsman who nonetheless wasn't nearly as skilled as Randy Scott's future collaborator Budd Boetticher.

Louis Mason
as Duke
View All

Critic Reviews for The Nevadan

Audience Reviews for The Nevadan

There are no featured audience reviews yet. Click the link below to see what others say about The Nevadan!