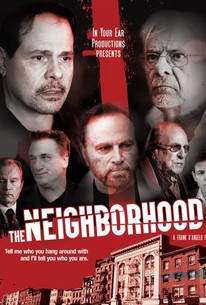 Street-gang leader Angelo Donatello (Frank D'Angelo) runs a small-time operation in the same area as Mafia kingpin Gianluca Moretti (Giancarlo Giannini). When he refuses to join Moretti's plan to distribute heroin in their neighborhood, Angelo and his gang find themselves at war with the mob and battling for control of their territory. Franco Nero, Armand Assante, and Burt Young co-star in this crime drama. Frank D'Angelo also wrote and directed.

Critic Reviews for The Neighborhood

There are no critic reviews yet for The Neighborhood. Keep checking Rotten Tomatoes for updates!

Audience Reviews for The Neighborhood

There are no featured audience reviews yet. Click the link below to see what others say about The Neighborhood!