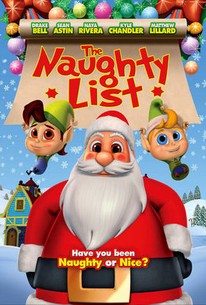 Two young elves, WINTER and SNOWFLAKE (It's a boy elf name!!!) have a hard time following the rules and are prone to sneaking off for some good elf playtime. But after wrecking the North Pole's official Christmas tree, the two elf brothers along with a rebellious reindeer named SPARKLE find themselves on the dreaded Naughty List. They are forced to do mundane horrible tasks like washing windows, cleaning bathrooms and more but seem to always make a bigger mess than they had to begin with. After the group is regulated to kitchen duty, they somehow manage to give the whole North Pole food poisoning including Santa! Now with only hours to go before Christmas, they are the only ones left to help save Christmas.(c)Arc Entertainment

It's not sophisticated enough for older children, but young ones will probably be entertained by 'The Naughty List.'

There are no featured audience reviews yet. Click the link below to see what others say about The Naughty List!