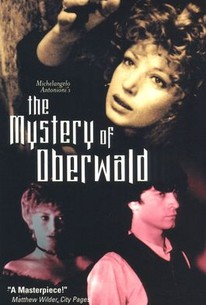 One of director Michelangelo Antonioni's more obscure works from the 1980s, this psychological period piece reunites the filmmaker with one of his favorite performers, Monica Vitti. Shot on video and based upon the play The Eagle Has Two Heads (Jean Cocteau made his own film version of the work in 1947), the film casts Vitti as a queen who squares off against an anarchist poet who has come to her castle to kill her. Due to his remarkable resemblance to the long-dead king of the land, the queen falls in love with the dissident.

Monica Vitti
as The Queen

Paolo Bonacelli
as Count of Foehn

The choice of the Cocteau play seems more arbitrary than inevitable, which raises the form-versus-content issue even more than in most Antonioni features.

The visual play is interesting, but it doesn't make the director's case that video is as viable as film for artful storytelling.

The end result is cold. The melodrama's emotion and the technical magic are absent. [Full Review in Spanish]

Mine is a minority opinion, but I am convinced that his experiments with video and colour will make Il Mistero di Oberwald the Becky Sharp of cinema's long-promised and long-deferred electronic era.

Too stage-bound and the dialogue is too tacky.

This opulent made-for-Italian-TV production is a must-see for both for fans of Italian director Michelangelo Antonioni and of legendary surrealist Jean Cocteau.

The Mystery of Oberwald marked a brave experiment from the great director.

An uneven, unusual work, not entirely successful as an experimental film or as a melodrama, but a must-see for film students and Antonioni buffs.

There are no featured audience reviews yet. Click the link below to see what others say about The Mystery of Oberwald (Il Mistero di Oberwald)!