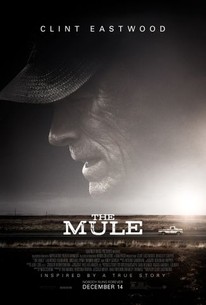 Critics Consensus: A flawed yet enjoyable late-period Eastwood entry, The Mule stubbornly retains its footing despite a few missteps on its occasionally unpredictable path.

Critics Consensus: A flawed yet enjoyable late-period Eastwood entry, The Mule stubbornly retains its footing despite a few missteps on its occasionally unpredictable path.

Critic Consensus: A flawed yet enjoyable late-period Eastwood entry, The Mule stubbornly retains its footing despite a few missteps on its occasionally unpredictable path.

Earl Stone, a man in his 80s who is broke, alone, and facing foreclosure of his business when he is offered a job that simply requires him to drive. Easy enough, but, unbeknownst to Earl, he's just signed on as a drug courier for a Mexican cartel. He does well -- so well, in fact, that his cargo increases exponentially, and Earl is assigned a handler. But he isn't the only one keeping tabs on Earl; the mysterious new drug mule has also hit the radar of hard-charging DEA agent Colin Bates. And even as his money problems become a thing of the past, Earl's past mistakes start to weigh heavily on him, and it's uncertain if he'll have time to right those wrongs before law enforcement, or the cartel's enforcers, catch up to him.

News & Interviews for The Mule

View All The Mule News

Critic Reviews for The Mule

I think that there's a sweetness to some of the film... There is a certain self-criticism built into the role as it goes along.

Watching this movie is like checking the news after popping a Xanax. The world's going to hell in a handcart. But it's all good.

It's a winningly soft-hearted tale of a hard-hearted world, though, and one that never takes itself too seriously.

It's one of those star vehicles that's simply content to pick its own pace, and here there's never much risk of it suddenly breaking the speed limit.

The Mule is no better than it should be, except for that precious 90 per cent of its duration when its star is on its screen.

Not unwatchable by any stretch, but could have been so much better in the hands of another filmmaker.

Despite a few hiccups in the pacing, The Mule gallops quite gracefully.

In this incredible-but-true tale, Clint Eastwood stars as a 90-year-old horticulturalist and deadbeat dad unwittingly recruited as a drug mule for a Mexican cartel.

[Eastwood has] made a career out of deconstructing American myth-making, and here he's not only subverting very idea of the American dream itself, but his own cinematic style.

A terrible portrait of redemption by a director that seems to have lost everything that made him a golden choice decades ago. [Full review in Spanish].

Audience Reviews for The Mule

An all-star cast help deliver this middle-of-the-road tale of an old geezer rebuilding the bridge to his disassociated family. This is possible mainly due to the mad money the guy makes by running drugs. The work is competent, unfortunately even while avoiding the inherent moral implications, or any thoughts of it, thereby reducing the thrust of the work to little better than an offering from Hallmark. What"s more interesting than the actual plot is how the artist relays knowledge of the cultural divisions in the United States and offers ideas as to dealing with them.

For all purposes, this is Gran Torino 2 - or how Clint Eastwood plays another cartoonish old geezer who has the depth of a saucer (and befuddling motivations) and is supposed to be funny by talking shit to strangers - so, let's just forget this and go for Breaking Bad instead.

Clint Eastwood plays a real-life 90-year-old drug mule, though I must inform you dear reader that at no point does he hide his cargo in a very uncomfortable place. The Mule is an interesting story about the most unexpected mule. Eastwood plays a man broke and on the outs with the family he's neglected their entire lives. He takes up an offer to simply drive albeit for a Mexican drug cartel. As with most life-of-crime movies, what starts off uneasily becomes second nature as our characters get in over their heads. Except that doesn't really happen in The Mule. I would estimate twenty percent of the movie is watching Eastwood drive and sing along to the radio. There are some tense near misses where he's almost caught, but these are confined to the first half. In the second half the cartel becomes the chief source of danger, all because he doesn't go by their routes. If he's their most successful mule, having never had a ticket in his life, then why micromanage? There are some other nitpicks that nagged at me, like the cartel knows the DEA agents (Bradley Cooper and Michael Pena) are pulling over a very specific color and kind of car, but at no point do they change out Eastwood's car. Also, Eastwood is spending vast sums of money in public for a man who was losing his house, and yet no red flags there. Eventually Eastwood has to make a choice of family over angering the cartel and risking his life, and I think you'll know where his character arc is destined. The dramatic shape of the movie feels a little too inert for the stakes involved, leading to an all too tidy conclusion. Eastwood delivers a fine performance, as does every other actor involved. The movie kind of coasts along, much like Eastwood in his truck, on the inherent interest of its premise and the star power of its lead/director. The Mule might have worked better as a documentary. Nate's Grade: B-

Whether it's with movies like Trouble with the Curve or even more recent movies like The 15:17 to Paris, it should go without question that Clint Eastwood isn't making classics when he puts himself behind the camera over the last decade. I believe Gran Torino was his last memorable film that people will revisit for years to come. With that said, as far as movies he has directed, The Mule is almost good enough to join his club of recent classics. The way he tells this story in a very straightforward fashion may prevent that from happening, but this is a very enjoyable movie from start to finish. At 88 years old, this man shows no signs of slowing down and when you can still have gems like this every now and then, why should he? I had a very good time watching this film and here's why. After being fired from his job of many years, the now 90-year-old man in Earl Stone turns to smuggling drugs in the back of his truck when given the opportunity. Earning the respect from many members of the Mexican Cartel, he becomes a little more entangled with the goings on than he had originally planned. He enjoys the big paydays, but his streak of luck may be soon running out. Being hunted by DEA agents, this story quickly becomes interesting. Cutting back and forth between the two storylines, these two stories made for a very likable overall film. It also doesn't hurt that Eastwood has assembled an all-star cast once again. Obviously, Clint Eastwood as the leading man will please many viewers, as he has become an all-time classic. On top of a great leading performance, Bradley Cooper, Lawrence Fishburne, Michael Peña, Andy Garcia, Taissa Farmiga, and a few notable others support this story with a force that felt needed. I honestly found myself engaged from start to finish, regardless of the pacing. If it were a quiet character moment or a sequence of intensity, I was on the edge of my seat. It's not the most exciting film I've seen in a while or anything of that nature, but it's a film that cares about the story it's telling and just goes for it. As I mentioned, it's very straightforward, which is where I find my biggest complaints. Once the core story kicks in, it does go through the motions that you come to expect from a story like this, with not much new to offer. He is thrust into a life of crime that he didn't expect, he enjoys the fame while it lasts, and it will all eventually collapse in one way or another. For that reason, I wasn't impressed by the movie on a storytelling level, but more on how the story itself was told. I thoroughly enjoyed myself, due to the dialogue that was written by Nick Schenk, who also handled a similar Eastwood character in Gran Torino. I wasn't a big fan of his previous work on The Judge, but I'm happy to see a big improvement here. I look forward to seeing what feature film comes from his screenplays next. Overall, The Mule will surely please fans of Clint Eastwood and fans of this genre in general, but those who go in hoping for a complex story that deviates from the norm may slightly be disappointed. This movie won't likely win any awards, but it's absolutely worth seeing. This is an easy watch with a solid screenplay, great performances, and an overall satisfying narrative. It's not a must see, but I do recommend checking out The Mule.