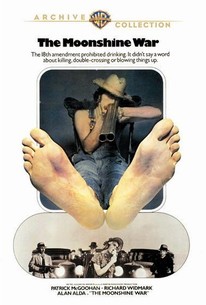 Frank Long (Patrick McGoohan) is the US revenue agent trying to bust a moonshiner on the eve of the repeal of Prohibition. Son Martin (Alan Alda) is the still operator who backs down from Long's proposed deal to buy the whiskey. Long hires two thugs (Lee Hazelwood and Suzan to force Son to make the deal, but they kill the sheriff. Dr. Taulbee (Richard Widmark) becomes the target of Long, and long is murdered by the deadly doctor. Son and Dr. Taulbee throw a party and enjoy the booze when the opposition is eliminated. The highlight of this dreary mountain melodrama are three songs, one each from Hank Williams Jr., Roy Orbison, and The Five Man Electrical Band.

Will Geer
as Sheriff Baylor

Critic Reviews for The Moonshine War

An amiable but tedious mix of comedy and drama.

There are no featured reviews for The Moonshine War at this time.