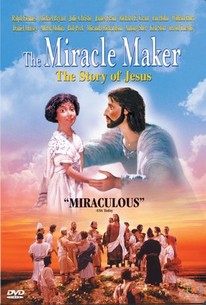 Michael Bryant
as The Doctor

Alfred Molina
as Simon the Pharisee

Bob Peck
as Joseph of Arimathea

David Thewlis
as Judas
View All

Critic Reviews for The Miracle Maker

It's a powerfully engaging film, one that correctly sees the gospels as spiritual autobiography, and Jesus's skill with parables as an art both fundamental and devastating.

Quite simply one of the most genuinely profound and noteworthy depictions of the gospel story of all time, in any medium.

Audience Reviews for The Miracle Maker

Excellent story for all children to watch and enjoy. A few parents could benefit as well. 5 stars 8-21-12