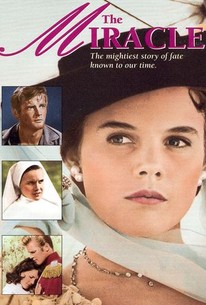 Teresa (Caroll Baker) enters a Spanish convent in hopes of becoming a nun. She falls in love with Michael (Roger Moore), who soon joins the Duke of Wellington's army to drive Napoleon's troops out of Spain. Teresa leaves the convent to go with Michael. When she leaves, the statue of the Virgin Mary at the convent takes on human form, hence the "miracle." Teresa loses track of Michael and runs off with a gypsy named Guido (Vittorio Gassman). When he is killed by his brother, she takes up with a bullfighter, until he dies in the ring. In Belgium, she is reunited with Michael, who is on his way to the battle of Waterloo. However, she leaves him to return to the convent. Military battles and gory bullfights contrast with the lavish ballrooms, beautiful cathedrals and colorful gypsy dances.

Torin Thatcher
as Duke of Wellington

Critic Reviews for The Miracle

Max Reinhardt's famous stage spectacle of many years ago may have been a thing of magic in its day but the belated film stemming from it is dull, tasteless and at times ridiculous.

Audience Reviews for The Miracle

Beautiful looking film but the breathtaking cinematography is in the service of a preposterous story.