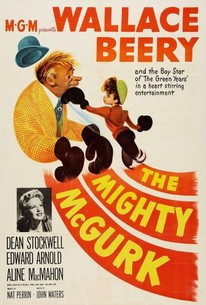 It's The Champ all over again, with Wallace Beery as a down-and-out prizefighter and Dean Stockwell as the small boy whom he adopts. Mighty McGurk also borrows from Beery's earlier The Bowery (33) by placing its story in that New York neighborhood in 1900. The final echo from Wally Beery's movie past is Aline McMahon, who costarred with Beery in Ah, Wilderness (35). The plot of Mighty McGurk involves Beery's rescuing of the orphaned Stockwell, an English lad, from the clutches of his evil guardian Edward Arnold. The boy in turn inspires Beery to return to the boxing ring after several years of boozy grub work as a Bowery waiter.

Critic Reviews for The Mighty McGurk

There are no critic reviews yet for The Mighty McGurk. Keep checking Rotten Tomatoes for updates!

There are no featured reviews for The Mighty McGurk at this time.