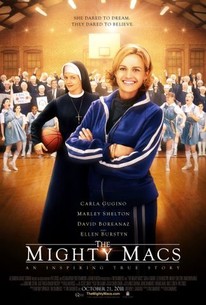 Critics Consensus: Its heart is obviously in the right place, but The Mighty Macs is too blandly formulaic to transcend the genre's many clichés.

Critics Consensus: Its heart is obviously in the right place, but The Mighty Macs is too blandly formulaic to transcend the genre's many clichés.

Critic Consensus: Its heart is obviously in the right place, but The Mighty Macs is too blandly formulaic to transcend the genre's many clichés.

The Mighty Macs is based on the incredible true story of the 1971-72 Immaculata College team that started in obscurity but became the original Cinderella story in women's basketball. This team of pioneers went from barely making that inaugural tournament to the first dynasty in their game. And Cathy Rush (Carla Gugino, the woman that was ahead of her time, became immortalized when she was inducted into the Naismith Memorial Basketball Hall of Fame. -- (C) Quaker Media

News & Interviews for The Mighty Macs

View All The Mighty Macs News

Critic Reviews for The Mighty Macs

Sometimes a film feels a bit too pat and yet is impossible to resist.

Without resorting to any trick plays, "The Mighty Macs" is the equivalent of high-top Converse All-Stars: timeless and effective, but perhaps not flashy enough for the kids at the mall.

The blandly inspirational sports flick "The Mighty Macs" is warm- spirited but all too obvious, even as the charms of its lead performer Carla Gugino help sell this familiar story.

There's something refreshingly unpushy about the movie and its beliefs, and Gugino seems to be sauntering through on her way to a different, spikier movie, the kind that is her stock in trade.

[It's] given such old-fashioned, kid-gloves treatment that its potential warmth and excitement caves under the weight of writer-producer-director Tim Chambers' good intentions.

Sports movies live and die by what takes place on the court or in the field, and this one feels rather rote.

The Mighty Macs - a feel good film for families, females, and sports fans alike...even if you're not from Philadelphia.

There's a nice inspirational message for young girls in this movie, and boy does this movie hit it hard.

...a well-intentioned and consistently earnest endeavor that is, unfortunately, completely underwhelming almost from start to finish...

If you're a sucker for underdog stories and love rooting for a ragtag bunch that takes the nation by surprise, you'll find that "The Mighty Macs" delivers the same emotional payoff as "Hoosiers."

A by-the-numbers underdog sports movie, but as a female athlete who benefited from the national attention that team brought to female athletes, I embrace this feel-good story.

Audience Reviews for The Mighty Macs

Nice sports movie. Typical "root for the underdog" type, but well done. I have always liked Ellen Burstyn. She seems to really know how to pick decent movies to be in...this one is no exception.