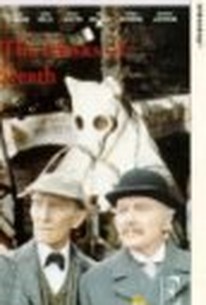 Twenty-seven years after Hound of the Baskervilles (1959), Peter Cushing makes a belated return to the role of Sherlock Holmes in the made-for-television Masks of Death. Befitting his age, Cushing plays Holmes in retirement, content to play his violin and look after his bees. He is dragged back into action by a series of baffling East End murders. Each one of the victims has been discovered with an expression of stark, raw fear frozen on his or her face. With faithful Dr. Watson (John Mills) at his right hand, Holmes puts the pieces together. Ray Milland and Anne Baxter co-star in this stylish bouquet to the Baker Street Irregulars of the world. ~ Hal Erickson, Rovi