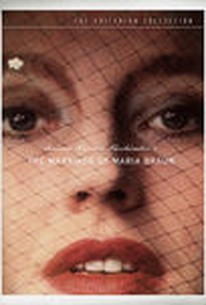 The film that elevated German director Rainer Werner Fassbinder from domestic approbation to international acclaim, The Marriage of Maria Braun stars the director's on-and-off favorite actress Hanna Schygulla in the title role. During the allied siege of Germany in the last year of the war, Maria's new husband (Klaus Löwitsch) is shipped off to the Russian front before the marriage is consummated. As she struggles to survive wartime deprivations, Maria haunts the local train station, seeking out information concerning her husband. When it appears that she's a widow, Maria takes a job as a barmaid and befriends a black soldier (George Byrd) from the occupying allied troops, who sees to it that Maria's family receives vital food and supplies. The opportunistic Maria eventually takes a job with a wealthy importer (Ivan Desny), building herself up to a position of power and indispensability. Though she sleeps with her employer, Maria still carries a torch for her husband. ~ Hal Erickson, Rovi

Hannes Kaetner
as Justice of the Peace

Schygulla gives a magnificent performance as a vulnerable young woman who becomes a self-confident, independent and competent survivor yet still comes to a bad end, largely because of the basic corruption of her world

Fassbinder himself was cruel and distant to those around him, particularly those who loved him, and in Maria Braun, he created an indelible monster who is perversely fascinating.

The Marriage of Maria Braun is both an epic comedy and a romantic ballad, two not especially friendly forms that become seamlessly one in the sweet, tough, brilliantly complex performance of Hanna Schygulla.

Though Fassbinder takes a more open attitude toward his characters, letting them exist as fully developed psychological specimens, his deadly irony continues to operate on the level of mise-en-scene.

It's the film's feminist edge that remains powerful, and it's easy to see why it became Fassbinder's biggest box office success.

Had Robert Altman not already employed the title 3 Women for his 1977 gem, that would have handily served as a header for Rainer Werner Fassbinder's acclaimed BRD Trilogy.

Bravura masterwork, tender and lovely, about destruction and loss... a melodrama every bit as good as anything Douglas Sirk ever committed to film, and watching it, the loss of Fassbinder is ever more painful to contemplate.

Fassbinder's talents for creating his own style of fully realized melodrama shines through here, but not as brightly as Schygulla.

A feature of desire and futility, of resourcefulness and inevitability, and of honestly assessing a plethora of contradictions on a human and societal level.

... a mirror of a country throughout a complex era. [Full review in Spanish]

This movie -- emotionally absorbing, visually breathtaking and intellectually demanding -- is a masterpiece.

Hanna Schygulla shines as a fascinating character who grows from a desperate, devoted wife into a cynical, relentless beauty - a reflection of the decadence of postwar Germany in this always compelling character study, the first film of Fassbinder's so-called BRD Trilogy.

with a bravura performance from hanna schygulla and shot by michael ballhaus, who became scorsese's cinematographer, this is an absolutely stunning film for 1979, and the one that made fassbinder an international star, a mere 3 years before his death. on the surface it's the story of an independent woman who does what she has to to get ahead in the chaos of post war germany. on another level it's political allegory about germany itself and it's place in history. funny and highly entertaining, fassbinder's aim was to make a german hollywood film and he references some of his favorites, especially curtiz' 'mildred pierce'. really fascinating work.