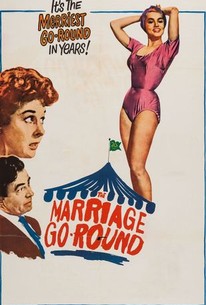 Leslie Stevens adapted his own stage comedy Marriage-Go-Round for the movies, watering down the more explicit sex talk but keeping its sly innuendo intact. The stunning Julie Newmar plays a Swedish gymnast who wishes to mate with a genius and produce the "perfect child." She chooses professor James Mason for this honor, which wouldn't have been such a problem had not Mason already been married to Susan Hayward. Mason is tempted, but ultimately the head wins out over the libido and the professor returns to his wife, while the decidedly unpregnant Newmar returns to Sweden. Marriage-Go-Round is inclined towards staginess, but this can be forgiven whenever Julie Newmar, recreating her Broadway role, sashays into view. ~ Hal Erickson, Rovi

A. Ben Astar
as Sultan

Critic Reviews for The Marriage-Go-Round

There are no critic reviews yet for The Marriage-Go-Round. Keep checking Rotten Tomatoes for updates!

There are no featured reviews for The Marriage-Go-Round at this time.