The Man With the Iron Fists2012 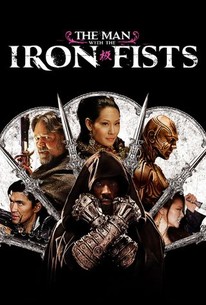 Critics Consensus: Messy kung-fu homage The Man with the Iron Fists demonstrates a slavish affection for the genre it mimics, for better or worse.

Critics Consensus: Messy kung-fu homage The Man with the Iron Fists demonstrates a slavish affection for the genre it mimics, for better or worse.

Critic Consensus: Messy kung-fu homage The Man with the Iron Fists demonstrates a slavish affection for the genre it mimics, for better or worse.

The Man With the Iron Fists Videos

The Man With the Iron Fists Photos

Making his debut as a big-screen director and leading man, RZA-alongside a stellar international cast led by Russell Crowe and Lucy Liu-tells the epic story of warriors, assassins and a lone outsider hero in nineteenth-century China who must unite to destroy the clan traitor who would destroy them all. Since his arrival in China's Jungle Village, the town's blacksmith (RZA) has been forced by radical tribal factions to create elaborate tools of destruction. When the clans' brewing war boils over, the stranger channels an ancient energy to transform himself into a human weapon. As he fights alongside iconic heroes and against soulless villains, one man must harness this power to become savior of his adopted people. -- (C) Universal

Terence Yin
as Governor
View All

News & Interviews for The Man With the Iron Fists

View All The Man With the Iron Fists News

Critic Reviews for The Man With the Iron Fists

It's leaden, boorish and dull.

an affectionate recreation of Shaw Brothers kung fu, but for all its inventive weaponry & varied fighting methods, its heady mêlée of sex & gore, its grand gestures and nostalgic stylings, it is also entirely lacking in any real substance of its own.

Numb pastiche, so frazzled you can't find a pulse.

The grindhouse grinds on. There are a few pretty sparks among the ugly noises.

In any case, Crowe's a hoot, RZA's instrumentals mostly deliver (save the occasional and baffling metal guitar), and I left the theater not lamenting that this movie exists. Good hustle, everybody.

All that matters here are cockamamie anachronistic music cues, low-rent filmmaking and one spectacularly hammy turn from Russell Crowe.

The Man with the Iron Fists is an off-balanced and bloated martial arts film that barely gets by on its gorgeous set design.

Jeremy Lebens
We Got This Covered

When you team with Eli Roth, who has the writing talent of a sociopathic thirteen year old boy on Ritalin, what can you possibly expect but swill?

A scrappily authentic and entertainingly bloody tribute to old-school chopsocky films and taken purely on those terms, there's not a lot to complain about.

The movie is undeniably colorful and action-packed, and gorier than a slaughterhouse floor. But something's missing.

Audience Reviews for The Man With the Iron Fists

Seven clans, a fortune in gold. Let the battle begin. Good Movie! The score was great. An interesting mix of hip hop, symphonic and other genres. The costuming, weaponry, set design were all great and looked great on film. This film had a lot of funny moments. As an adult, I can appreciate the humor from a dirty joke and they did them well. The fighting and action were awesome. The acting was okay, but I think the best job goes to Lucy Liu and Russell Crowe because they gave the best performances. Overall, the movie is just a fun flick to go rent on a Friday night. Lots of blood, decapitation, fun martial arts, subliminal dirty jokes, sarcastic humor, special effects, and a unique, urban take on the classic Kung Fu films we've learn to love over the years. This is not a movie you waste your time dissecting. You either love it or you hate. I took the movie for what it was and I loved every minute of it. It had everything an action flick should have, great action, great costumes, great weapons, solid plot and good actors. In Jungle Village, the leader of the Lion's clan Gold Lion is summoned by the Governor and assigned to protect his gold that will be transported through the village. However he is betrayed and murdered by the greedy Silver Lion and Bronze Lion. Gold Lion's favorite son Zen Yi, a.k.a. The X-Blade, seeks revenge and heads to Jungle Village, but he is defeated by Brass Body and rescued by the local Blacksmith Thaddeus. Meanwhile the Gemini Female and the Gemini Male protect the Governor's gold, but they are vanquished by the army of Silver and Bronze Lion. The Blacksmith is abducted by the Lions and has his arms severed by Brass Body. However he is saved by the British Jack Knife, who is the emissary of the Emperor, and he manufactures iron arms for Thaddeus. Meanwhile the Governor sends the Jackal army to fight against the Lions and they hide the gold in the brothel of Madam Blossom. However, Madam Blossom and his girls form an army of black widows and together with Jack, Zen Yi and The Blacksmith, they fight against the Lions.

I'm struggling to decide: was this a decent movie with some really bad parts, or a terrible movie with a couple of awesome parts? "Uneven" is the best way to describe RZA's directorial debut, in which a plot resembling an inner-city gang war (and vaguely reminiscent of 70s blaxploitation films) is transposed to 19th century China, and the director plays the blacksmith arming both sides and caught in the middle. The supporting cast is so-so - I've never thought Lucy Liu much of an actor, but Russell Crowe acquits himself well - and though Tarantino put some money behind the picture, it comes off looking sorely imitative, using a lot of Tarantino's stylistic calling cards but lacking his smoothness and never quite confirming whether it's tongue-in-cheek or whether we should take it at face value. It was an interesting departure and its flaws can teach you a lot about film-making, but it's far from essential viewing.

Writer, director, screenplay, actor...awful, awful, awful, awful. I really can't decide which one RZA was worse at. The hip-hop soundtrack was out of place also. Shame on Russell Crowe, and Lucy Liu for even being involved in this fiasco...

It's easy to see what RZA has in mind with The Man with the Iron Fists, but the execution just isn't there.

The story is prime for violence and martial arts antics, but the 100 minutes of screen time isn't as enjoyable as it sounds. The dialogue is poorly written and the fact that nearly all of it is in English doesn't blend well with the style and setting of the film.

The action is highly stylized and the violence is over the top bloody; however, the editing is a huge disappointment during these segments.

RZA provides the narration with an unconvincing voice and his acting skills are just nowhere to be found. Russel Crowe looks to be going thought the motions and the rest of the cast just get by with what they are asked to do.

The Man with the Iron Fists lacks the direction to be anything spectacular, thus leading to a film not worth recommending.

The Man With the Iron Fists Quotes