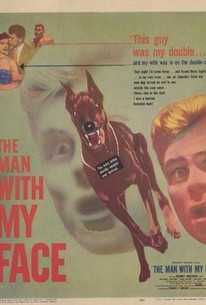 The Man with My Face Photos

Adapted by Samuel W. Taylor from his own novel, The Man with My Face is an acting tour de force for Barry Nelson. The star is cast as an accountant who returns home late one evening, only to discover that a look-alike has taken his place. So persuasive is the phony man that the real one is regarded as an impostor. Even his wife (Lynn Ailey) and business partner (John Harvey) seem to have fallen for the look-alike's subterfuge. Accused of bank robbery, the poor man must rely on his ex-sweetheart Mary (Carole Mathews) and her brother Walt (Jack Warden in his film debut) to help him clear himself and expose his "evil twin." The climax borrows a gimmick from an earlier "doppelganger" melodrama, The Black Room (1935). Man with My Face was filmed on location in Puerto Rico.

Critic Reviews for The Man with My Face

The B film has a good premise over mistaken identity, but a lousy execution.

There are no featured reviews for The Man with My Face at this time.

The Man with My Face Quotes