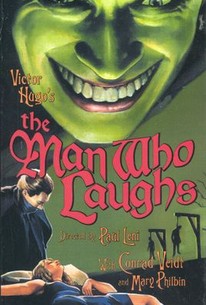 The Man Who Laughs Photos

The second of German director Paul Leni's American films (Cat and the Canary was the first), The Man Who Laughs is a lavish adaptation of the novel by Victor Hugo. The story concerns Gwynplaine, the son of an enemy of the evil King (Sam DeGrasse). Putting Gwynplaine's father to death in his torture chamber, the King exacts a further revenge by ordering that the boy's face be carved into a permanent, hideous smile. Abandoned in the snowy hills, Gwynplaine rescues another outcast, a blind girl named Dea. The two join a circus troupe and grow up together. The adult Gwynplaine (played by Conrad Veidt) falls in love with the sightless Dea (Mary Philbin), who "sees" only his kindnesses and not his grotesquely smiling face. When his noble heritage is revealed, Gwynplaine is presented in court before the Queen, who considers his permanent grin an insult. Once more an outcast, Gwynplaine sails to the New World, with the loving Dea at his side. While many existing prints of the silent Man Who Laughs are in washed-out black and white, it should be noted that the film was originally (and exquisitely) tinted and toned, and was also accompanied by a Fox Movietone musical track. Though the property was later optioned by Kirk Douglas, The Man Who Laughs was never remade.

Brandon Hurst
as Barkilphedro, the Jester

Torben Meyer
as The Spy

Julius Molnar Jr.
as Gwynplaine as a Child

Critic Reviews for The Man Who Laughs

The Man Who Laughs is a truly great, a devastatingly beautiful film.

As usual in Hugo, love is measured in sacrifice, yielding a sincere and extravagant sense of romance.

Baclanova is amusing as a decadent duchess, but it's Leni's pictorial genius -- aided here by what must have been an enormous budget -- that marks the film as one of the most exhilarating of late silent cinema.

This production has been fashioned with considerable skill. It is, of course, a gruesome tale in which the horror is possibly moderated but none the less disturbing.

One of the final treasures of German silent Expressionism.

Though an early entry in dramatic horror, it tackles some remarkably dark and mature themes.

Veidt is the beating heart of The Man Who Laughs, anchoring its grotesqueries in a sense of tragedy and pathos.

Leni's mastery of framing, depth, lighting and blocking are rivaled only by Veidt's performance, a thing of flawless beauty.

The superb German actor Conrad Veidt plays the pathetic protagonist, while Mary Philbin, whose most celebrated screen role was opposite another physically damaged hero in The Phantom of the Opera, is extremely touching as his beloved.

Veidt gives one of cinema's most sensitive and moving performances.

Audience Reviews for The Man Who Laughs

Based on a novel by Victor Hugo, this is the story of Gwynplaine- a nobleman's son who, when he was a child, was kidnapped by a political rival, and disfigured by a gypsy "surgeon" who carves a perpetual smile onto the young boy's face. Finding shelter with a traveling freakshow, Gwynplaine matures into adulthood and falls in love with the beautiful, but blind Dea, who is the only person able to get past his appearance. Eventually Gwynplaine gets drawn back into the world of political intrigue where he finds himself forced to make some really crucial decisions. Because of Gwynplaine's facial deformity (which also served as the inspiration for Batman's arch nemesis The Joker), and the garish freakshow elements, this film is often thrown in with the horror genre. In reality, it's really just a sweeping melodramatic romance, and a decent one at that. This was made for Universal, but fits right in with the German Expressionist era that many of the cast and crew got famous in. It features wonderful shadowy cinematography, moody set designs, and some good makeup effects from renowned artist Jack Pierce. It's a silent affair, but has some great music and sound effects to carry it along. I did enjoy the story, but feel that, at 110 minutes, this is too long. Maybe if this were a talkie this wouldn't be an issue. Since it's silent though, a lot of it feels really drawn out and overblown. I really dug the performances though. Conrad Veidt is terrific as Gwynplaine, and Pierce's makeup effects are pretty snazzy, especially considering when this was made. Mary Philbin is captivating as Dea, and she and Veidt make for a wonderful screen couple. The performances by Olga Baclanova, George Siegmann, and Cesare Gravina are pretty swell as well. All in all, this is a really good film, but somewhat flawed. Maybe if it were a little tighter my grade would be a bit higher. That said though, I still really enjoyed this, and definitely think you should give it a try.

A great classic movie, I really liked it, it's beautiful. I can tell that many films have been inspired by this story, and it's great to finally see the inspiration. I highly recommend seeing this movie.

spectacular movie!! Its not so much a horror movie as it is a romance. I ador Conrad Veidt and Mary Philbin. They are both great!!

In 1690, in England, the nobleman Lord Clancharlie returns from his exile to see his young son. The peer is captured by the cruel King James II and before being killed, he is informed that his beloved son had been sold to the gypsies Comanchicos that carved a permanent grin on his face. The Cormanchicos abandon the boy in the cold snowing winter, and while looking for shelter, he finds a baby hold in the arms of her dead mother. He brings the baby with him and they are welcomed by the philosopher Ursus (Cesare Gravina), who finds that the baby is blind and raises them. Years later, Gwynplaine (Conrad Veidt) becomes a successful clown, and together with the blind Dea (Mary Philbin), they present plays for common people. Gwynplaine and Dea are in love for each other, but he refuses to marry her because of his ridiculous appearance. When the evil jester Barkilphedro (Brandon Hurst) discloses the origin of Gwynplaine, he plots a means to be rewarded by the Queen, jeopardizing the love of Gwynplaine and Dea. The Man Who Laughs" is a magnificent classic based on the famous Victor Hugo's novel. The performances of Conrad Veidt and Brandon Hurst are amazing and there are many touching and heartbreaking scenes. My eyes became wet when the artists act like the audience cheering for Gwynplaine to spare Dea from the truth. The appearance of the character Gwynplaine inspired Bob Kane in the creation of "The Joker", one of Batman's greatest enemies. Another point that I would like to highlight is the resemblance of Madonna, in the beginning of her career, with the Russian actress Olga Baclanova, who performs daring scenes including of nude with her amoral character of Duchess Josiana. I have never read Victor Hugo's novel, but it seems that the conclusion in the original story is less optimistic than in this movie, but anyway I loved this film. My vote is ten.

The Man Who Laughs Quotes