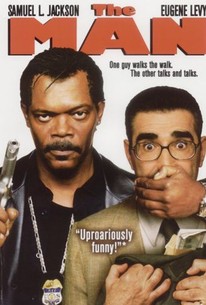 Critics Consensus: Despite the steely presence of Samuel L. Jackson and the comic timing of Eugene Levy, The Man's plot is pointless and its jokes rehashed, as it ends up playing out like the Odd Couple with gas.

Critics Consensus: Despite the steely presence of Samuel L. Jackson and the comic timing of Eugene Levy, The Man's plot is pointless and its jokes rehashed, as it ends up playing out like the Odd Couple with gas.

Critic Consensus: Despite the steely presence of Samuel L. Jackson and the comic timing of Eugene Levy, The Man's plot is pointless and its jokes rehashed, as it ends up playing out like the Odd Couple with gas.

Les Mayfield directs Samuel L. Jackson and Eugene Levy in the buddy action comedy The Man. Jackson plays ATF agent Derrick Vann. His partner, who it turns out was corrupt, has been killed after a cache of guns were stolen from the ATF office in Detroit. Internal affairs believe Derrick was in on the gun theft, forcing him to go off on his own to bring the bad guys to justice. Dental supply salesman Andy Fiddler (Levy) happens to be in Detroit for a business convention. During the course of figuring out who is responsible for his partner's death, Derrick arrests Andy because of a miscommunication. Soon the hard-edged law enforcer and the meek businessman team up to extricate themselves from their life-threatening predicament.

News & Interviews for The Man

View All The Man News

Critic Reviews for The Man

At what point do you know that a movie isn't just bad, it's off-the-scale, surrender-all-hope, no-turning-back bad?

At a zippy 83 minutes (including an ingenious title sequence that sets up the crime), The Man could be a lot worse. But with this kind of talent, it should be a lot better.

The Man arrives in theaters today with a sheet over its head and a tag on its toe.

The chattering salesman and the curse-crazy cop never click, but they have their moments.

The pairing had potential to be quite funny, but unfortunately they are stuck with a script that feels like its been on the shelf since the mid-'80's.

While Fiddler is a bumbler, he is not stupid, and actually makes a few good decisions. Vann is clever dealing with criminals, but he has some emotional shortcomings. They are an interesting pair, and in this genre, that is what really counts.

A derivative, readily-forgettable insult to the intelligence!

If the fart jokes had been cut out, if the ultimate identity were less of an anticlimax, if Levy had had some context, if Jackson showed the slightest rapport with his co-star... No, it's no good; The Man is a dud. Move along people, nothing to see here.

Only Levy gets out of this one looking good.

Audience Reviews for The Man

Absolutely terrible comedy buddy movie. Bearing in mind that Samuel L. Jackson and Eugene Levy have built their careers playing pretty much the same characters in each of their respective movies, you don't even need to see this to know exactly what it's going to be like. Take some advice: skip it and spend your 90 minutes more profitably elsewhere.

I hadn't had great expectations for this film but was pleasantly surprised by some of it's hilarious content. Eugine Levy provides non stop laughter and the relationship between him and Samuel L Jackson throughout the film, reminded me much of the film "Midnight Run"

Obey The Rules... Or Die Laughing.
The day I laughed my Butt off was the day when I saw this Movie, it is incredibly funny. Christ never laughed so hard before watching a Movie with Samuel L. Jackson. If you think this Movie is an Action Movie you are wrong! Yes there is a tiny bit of action! But most of the time LOL even the end didnt have mercy for to take a Breath. InTheBasket