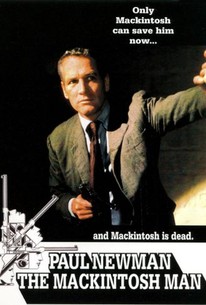 John Huston directed this cold war spy thriller (from a script by Walter Hill) concerning a British agent trying infiltrate the organization of a nefarious communist spy. Paul Newman is Joseph Reardon, a British secret agent commissioned by Mackintosh (Harry Andrews) to impersonate a jewel thief. When the police are tipped off about his diamond robbery, Reardon is arrested and shipped off to a high-security prison. At the prison, he meets a convicted Russian spy and the two are involved in a prison break, arranged by a mysterious group called the Scarperers. After the successful breakout, Reardon finds himself drugged and sent to Ireland. It turns out that the escapade was organized by Mackintosh in the hopes Reardon could infiltrate the Scarperers and gather information on the group's leader, Sir George Wheeler (James Mason), and prove him to be a Russian spy.

Roland Culver
as The Judge

Hugh Manning
as The Prosecutor

Eric Mason
as The Postman

Critic Reviews for The MacKintosh Man

A good genre film in the ice cold vein of The Maltese Falcon. It isn't nearly as rich nor fine as that early Huston classic but tells an interesting story with a sure sense of atmosphere, location and supporting characters.

There's a whole lot of nothing going on here.

The screenplay by Walter Hill... has very little to do with character and motivation and everything to do with the incidents and the mechanics of the spy trade.

The movie is irritating in its refusal to make things clear; if spy movies are going to work like clockwork, they have to be put together with some care.

The end of this film looks extremely beautiful and sad, one of the bests that Huston has filmed. [Full Review in Spanish]

This is by no means a bad film, but it should have been better considering the names involved.

For the most part the film is standard fare, with plot discrepancies countered by the film's atmosphere and star appeal.

Actioner starring Paul Newman is worth seeing, but marginally.

This is an espionage film directed by John Huston without a trace of either the artistry or -- even more surprising -- the technical proficiency of this great director.

This film never risks being realistic or even comprehensible, but it will pass a Sunday afternoon quite pleasantly.

Audience Reviews for The MacKintosh Man

Paul Newman's attempt to do a James Bond movie?

A "British" intelligence agent sniffs out corruption undercover. John Huston's thriller is slow moving and almost blithe in its action, acting, and direction. it is almost as though all involved - audience and filmmakers - know what is going to happen, so there is little commitment in the execution. What is more, Paul Newman's "British" accent is so inconsistent that it sounds dubbed in some parts and like Paul Newman in others. There's no real plot-based need for him to be British, but like I said, it doesn't seem like much thought was put in to the story and acting. Overall, this isn't a terrible film, but it certainly doesn't radically engage.

It's sort've odd to hear Paul Newman with an Australian accent and not his usual charismatic self, but this is still a very interesting career move for him and it just shows his wide range. I really like the prison/escape scenes and just the overall feel. Even though it doesn't become more than a semi-James Bond, it's fun enough to stand on its own.