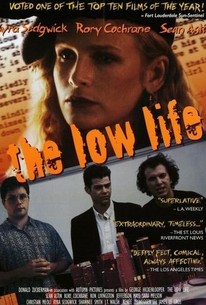 In this drama set in Los Angeles, a group of Yale graduates spend their days as mindless workers at a mundane job and their nights as mooching barflies who enjoy cutting down other patrons with their smart-mouth comments. The main character John loses his roommate and must move into the filthy apartment of Andy, a strange sort who collects and paints Nazi soldier figurines. John later gets a temporary job with a conniving slum lord. Following a failed romance, John suffers a "controlled mental breakdown."

Critic Reviews for The Low Life

A modest but deeply felt film with a solid ensemble cast.

The movie belongs to Astin, who brings to the role of Andrew the same intense burning-eyed sincerity with which he imbued the title role of a football-obsessed Notre Dame student in Rudy.

Cochrane, Sedgwick and the always-cast- for-dopey LeGros are fine, but it's Astin that again shines, and it's primarily his performance that makes The Low Life an engaging sit.

Hickenlooper shows these lonely, mediocre people for what they are but without ever condescending to them or nudging us to feel superior to them.

There's something beguiling about The Low Life.

Audience Reviews for The Low Life

There are no featured audience reviews yet. Click the link below to see what others say about The Low Life!