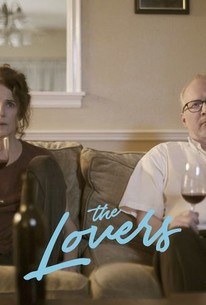 Critics Consensus: With appealing leads and a narrative approach that offers a fresh perspective on familiar themes, The Lovers tells a quietly absorbing story with unexpected emotional resonance.

Critics Consensus: With appealing leads and a narrative approach that offers a fresh perspective on familiar themes, The Lovers tells a quietly absorbing story with unexpected emotional resonance.

Critic Consensus: With appealing leads and a narrative approach that offers a fresh perspective on familiar themes, The Lovers tells a quietly absorbing story with unexpected emotional resonance.

The Lovers is a refreshing, funny look at love, fidelity, and family, starring Debra Winger and Tracy Letts as a long-married and completely dispassionate husband and wife. Both are in the midst of serious affairs and are increasingly committed to their new partners. But on the brink of officially calling it quits, a spark between them suddenly and unexpectedly reignites, leading them into an impulsive romance that forces them to navigate the hilarious complications of "cheating" on their respective lovers. A mixture of humor and powerful emotion, the story is a uniquely honest take on modern marriage.

Eric Satterberg
as John
View All

News & Interviews for The Lovers

View All The Lovers News

Critic Reviews for The Lovers

The Lovers sustains a poignant tone that makes me choke up every time I watch it.

A delicate, deadpan comic fable, as if someone gave Boccaccio a camera and an indie film budget.

"The Lovers" keeps folding, changing and evolving, but stays to its central theme, exploring two uncomfortably real characters who can't get out of the way of each other or themselves.

Jacobs has delivered a two-handed character study and, in this mission, he is handily assisted by his two powerful leads.

It's tempting to read this as a younger generation's condemnation of its parents' me-first indulgence, and an affirmation of familial unity by an unblinking, accusatory - but not histrionic - look at its opposite.

The Lovers uses familiar relationships and situations to show us something we may never have noticed about human behavior and the way we love each other. It's an extraordinary piece of filmmaking.

It serves as tender comedic fodder that proves the greater biting point the film makes about infidelity and monogamy. The film eviscerates the Hollywood sheen of middle-aged marrieds...

The Lovers finds notes of the sublime in the dueling performances of Winger and Letts.

It's worth seeing [Debra] Winger and [Tracey] Letts perform in this well crafted script. The way they move around each other in a kind of dance is fun to watch.

It is all delicious fun, as well as a clever and unexpected view inside a marriage, one that upends all sorts of assumptions.

Cate Marquis
We Are Movie Geeks
View All Critic Reviews (111)

Audience Reviews for The Lovers

An adult look at an adult subject w/o the usual finger-pointing of immaturity to mire it in meaningless distractions, a long married couple contemplate divorce just as their boy in college returns for a visit. A good script, great and sensitive director, and two outstanding leads elevate this to thinking person's comedy level. Some of us will be compelled to dwell on past mistakes as well.

TERMS OF ESTRANGEMENT - My Review of THE LOVERS (3 Stars) It's no secret that Debra Winger is my favorite living actor. That raspy voice, throaty laugh, and gorgeously expressive eyes combined with her gift of conveying complex emotions brought us legendary performances in URBAN COWBOY, AN OFFICER AND A GENTLEMAN, SHADOWLANDS, and especially TERMS OF ENDEARMENT. I couldn't wait to see her return to a leading role after 15 years of very little output or tiny but effective appearances in films like RACHEL GETTING MARRIED. My excitement grew when I found out she had been paired with celebrated playwright Tracy Letts (AUGUST: OSAGE COUNTY), who has proven himself to be an exceptional actor on HOMELAND and in such films as WIENER-DOG, CHRISTINE, and THE BIG SHORT. In writer/director Azazel Jacobs' THE LOVERS, Winger and Letts play Mary and Michael, a long-married couple who have long ago lost any passion for each other and have taken on romantic partners to fill that void. Mary has fallen for Robert, a soft-spoken writer played by Aidan Gillen (GAME OF THRONES) while Michael has found love with the difficult, needy ballet teacher Lucy (Melora Walters of BOOGIE NIGHTS and MAGNOLIA). Both have convinced their respective lovers that after their college-aged son Joel (Tyler Ross) visits them with his girlfriend Erin (Jessica Sula) they will end their marriage and be only with them. Instead, they rekindle their romantic feelings for each other, thus "cheating" on their lovers. It's a clean, classic setup for a romantic comedy, but Jacobs and company play things straight with quite dark results. Jacobs clearly wants to honestly explore sexuality among the middle-aged set, all of which gets an effectively sobering treatment. It commendably doesn't go for the obvious choices or resolutions, but, unfortunately, the film disappointed me. Strangely enough, the first big elephant in the room is its score by Mandy Hoffman. It's an incongruously lush, orchestral, romantic soundtrack that would not have felt out of place in LA LA LAND, a Woody Allen trifle, or an Audrey Hepburn vehicle. Here, it makes no sense. ON screen, we're watching damaged people betray each other, yet the music tells us they're minutes away from wrapping themselves around a light pole in the rain. It's constant and truly threw me out of the movie as the actors and director valiantly fought to keep me in it. To his credit, Jacobs has assembled a stellar cast. Winger and Letts are both superb, yet they're both given such little back story that I felt like the characters acted as puzzle pieces moved around at will by the filmmaker. There's something very schematic, flawlessly so, about the whole enterprise. Jacobs has crafted a much more visual film than I expected. He and his cinematographer, Tobias Datum, have made a lush, gorgeously shot film that could have easily ended up looking like a micro-budget indie. So much of the storytelling gets conveyed by silences, which normally would be a high compliment, but in this case, I mean it as criticism. You don't put an actor like Debra Winger in a film and not let her verbally go at it. With the exception of one short outburst, she never raises her voice and often says very little. That she does so to perfection seems besides the point when her natural resources often go to waste. She can do a role like this in her sleep, and I'm afraid that once the highly deserved goodwill for her return to the screen evaporates, this performance won't look like one for the ages. Don't get me wrong. She's still amazing, but her performance seems hampered by an underwritten script. Letts, on the other hand, has the better written role and masterfully plays his character's anxieties, impatience, and anger spotlessly. Ross (so great on THE KILLING), as their disapproving son has some terrific moments as someone who hopes he doesn't end up like his parents but who will clearly stumble. While Gillen isn't given much to do, his scenes with Winger show a looser side than he is usually given the opportunity to show, and Walters steals every scene she's in as a woman driven crazy by a lover who constantly lies to her. If anything, THE LOVERS is about a pair of liars. It basically asks the question, "Can two deceptive people carve out a sliver of happiness in their lives?" The answer ends up being surprising yet somewhat disheartening and abrupt. I understand what Jacobs is trying to say, but wish he had filled in the blanks a little more carefully. I've never made a case for an adept visual director to dial it back, but here's a promising film with some of the best performers in the business that could have benefited from more tell and less show.

With its weird and intrusive soundtrack and meandering plot line, The Lovers did a real disservice to Winger and Letts, not to mention us viewers and how this scored an 87 with the critics s beyond me. Doesn't say much about the current state of matrimony either. (5-21-17)