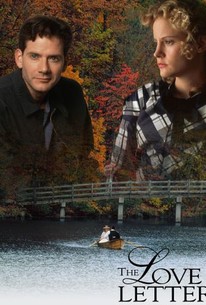 In this romantic fantasy based on the short story by Jack Finney, Scotty Corrigan (Campbell Scott) is a young man who is engaged to be married, but is having second thoughts about his upcoming wedding. Scotty buys an antique desk and -- hidden in a secret compartment -- he finds a letter from a woman named Elizabeth Whitcomb (Jennifer Jason Leigh), who lived during the 19th century. Fascinated by the letter, Scotty writes her a reply, using antique writing materials, and is shocked when he receives a reply -- somehow he's been able to communicate with her through time, and they begin a correspondence that spans a century and a half. It turns out that Elizabeth is also pledged to marry, but she does not love her fiancée, and a romance begins to blossom through the mail and across time. The Love Letter was produced for the television anthology series The Hallmark Hall of Fame.

Critic Reviews for The Love Letter

There are no critic reviews yet for The Love Letter. Keep checking Rotten Tomatoes for updates!

Audience Reviews for The Love Letter

I remember seeing this on TV, and absolutely loved it.