The Lord of the Rings: The Two Towers2002 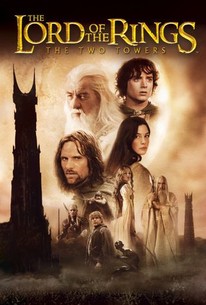 The Lord of the Rings: The Two Towers Photos

Frodo and Samwise press on toward Mordor. Gollum insists on being the guide. Can anyone so corrupted by the ring be trusted? Can Frodo, increasingly under the sway of the ring, even trust himself? Meanwhile, Aragorn, drawing closer to his kingly destiny, rallies forces of good for the battles that must come. Director Peter Jackson delivers an amazing second movie that won 2 Academy Awards (R)* and earned 6 total nominations including Best Picture. The journey continues. So do the astonishing spectacle and splendor.

Craig Parker
as Haldir
View All

News & Interviews for The Lord of the Rings: The Two Towers

View All The Lord of the Rings: The Two Towers News

Critic Reviews for The Lord of the Rings: The Two Towers

What an eyeful it is. This is probably the greatest battlepiece composed for the screen since Eisenstein's Ivan the Terrible.

This film is a towering achievement, and the next installment can't come soon enough.

The Lord of the Rings: The Two Towers is like being trapped in a nerd's bedroom.

The Two Towers is a satisfying and wholly gripping drama in its own right. Inevitably, Janus-like, it looks back to the Shire, and forward to the hour of doom. And after three hours, you will too.

When Gandalf arrives with reinforcements, descending a near-vertical slope using horses where you or I would use snowboards, the spirit of triumphant rampage is something rarely glimpsed since the days of Olivier and Henry V.

To live up to expectations, The Two Towers only had to be as good as its predecessor -- and, astoundingly, it's better.

It also has... layers of political dynamics going on which I actually thought was pretty interesting.

The Two Towers succeeds like few other middle installments do in serving as both a satisfying benchmark that ties the introduction and conclusion to this trilogy together.

I think this one might be the actual best of the franchise and it's all because of the Ents.

These Tolkien films have a weight and seriousness that very few sword-and-sorcery pictures of the past 30-odd years have attained.

This is, I can say without fear of exaggerating, one of the great films of all time.

Audience Reviews for The Lord of the Rings: The Two Towers

The second part of The Lord Of The Rings trilogy sees the fellowship part company. Frodo and Sam encounter Gollum, cleverly presented as a kind of wretched schizophrenic drug addict which makes for a much more interesting character dynamic than the "You're my best friend Sam! "I love you Mr. Frodo!" of the first film. Meanwhile Pippin and Merry escape their captors and persuade the forest dwelling Ent to join the fight in a rather ham-fisted eco analogy. And finally Aragorn, Legolas and Gimli whose camaraderie is developed find new allies in Rohan and rejoin Gandalf to defend the fortress of Helm's Deep in a quite spectacular and monumental battle sequence. Although The Two Towers is as long as The Fellowship Of The Ring, the intertwining story threads, all told in parallel complete with a liberal dose of action make for much better pacing. I still have a problem with stories reliant on magic because if characters can come back to life for no reason other than it's convenient to the plot or can just say "Abracadabra" and make danger, and therefore suspense, disappear makes for little in the way of narrative logic. I also felt that Saruman got far too little screen time which left a focal villain lacking, but in this film Jackson has made a fantasy film I not only endured, but enjoyed.

The Lord of the Rings: The Two Towers Quotes