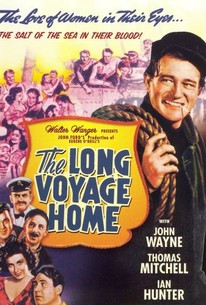 Four one-act plays by Eugene O'Neill form the basis of John Ford's World War II drama about the lives of merchant seamen. John Wayne stars as Ole Olsen, a young Swede attempting to get home as the rest of his crew prepares for shore leave; when he is drugged and kidnapped by the members of a rival ship, battle ensues.

Carmen D'Antonio
as Girls in Canoe

Arthur Miles
as Captain of Amindra

Art Miles
as Captain of Amindra

One of the finest of all the movies that deal with life at sea, and one of the most successful of all attempts to put Eugene O'Neill on film ...

Performances are uniformly excellent, Mitchell topping everything he has ever done in motion-pictures. Ian Hunter and John Wayne are brilliant.

It's not the most focused and sustained movie, but the solid acting and elegant direction elevate this to another level. What could have been a routine melodrama ends up being quite a classy production.

Less a plot-driven movie than a meandering look at the nomadic men who make their lives on the high seas for various reasons.

Shot by master cinematographer Gregg Toland, this is one of John Ford's most visually expressive film, one that also features the young John Wayne in a strong performance

A year before the United States entered WW2 (although it was already hot over in Europe) comes this adaptation of Eugene O'Neill's look at the lives of a crew of merchant seamen. John Ford uses many of his usual players, something of a theater company, and so the camaraderie of old hands working together permeates the work. John Wayne is listed as the star but that's not necessarily so. This is Thomas Mitchell's film, with Barry Fitzgerald co-starring, but its really a company work. Wayne is only in a supporting role as a Swedish crewman (and one of the worst Swedish accents in film history short of comedy, but the Duke is game and throws with all he has). It's a interesting tale in that, like the lives of the men portrayed, there is no real destination, only the going from port to port, dealing with the problems every voyage might present, little lost boys of the sea ... and so an undercurrent of sadness ... good storytelling.

Dreadfully dull tale featuring a very young John Wayne talking about probably the most boring cross Atlantic trip ever taken. Someone is a German spy on board and the audience doesn't care.

Story of a mixed bunch a merchant sailors. It's funny to hear John Wayne play a Swede. His accent is almost as bad as Jamie Lee Curtis's one in Trading Places, and that was on purpose. Thomas Mitchell is a character as always.

I really love this movie for being so completely unique and moody. The cinematography is absolutely breathtaking and the way John Ford manipulates the camera is completely revolutionary. This is from what I can tell one of the first anti-war messages for WWII, it's very direct and not overdone or sappy. This has great characters, an ensemble drama that should never be forgotten.