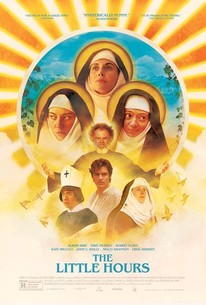 Critics Consensus: The Little Hours gets plenty of goofy mileage out of its gifted ensemble, anchoring its ribald laughs in a period comedy with some surprisingly timely subtext.

Critics Consensus: The Little Hours gets plenty of goofy mileage out of its gifted ensemble, anchoring its ribald laughs in a period comedy with some surprisingly timely subtext.

Critic Consensus: The Little Hours gets plenty of goofy mileage out of its gifted ensemble, anchoring its ribald laughs in a period comedy with some surprisingly timely subtext.

Medieval nuns Alessandra (Alison Brie), Fernanda (Aubrey Plaza), and Ginevra (Kate Micucci) lead a simple life in their convent. Their days are spent chafing at monastic routine, spying on one another, and berating the estate's day laborer. After a particularly vicious insult session drives the peasant away, Father Tommasso (John C. Reilly) brings on new hired hand Massetto (Dave Franco), a virile young servant forced into hiding by his angry lord. Introduced to the sisters as a deaf-mute to discourage temptation, Massetto struggles to maintain his cover as the repressed nunnery erupts in a whirlwind of pansexual horniness, substance abuse, and wicked revelry.

News & Interviews for The Little Hours

View All The Little Hours News

Critic Reviews for The Little Hours

The momentum peters out by the end, but by then its job is already done. "The Little Hours" is good for some big laughs.

Whether or not Baena does right by Boccaccio, he definitely does right by Aubrey Plaza, his girlfriend and indie comedy's reigning queen of mean.

No matter how obvious the set-up - what if men and women of the cloth were ... rude and sexy??? - the cast gives every scene just enough of a deadpan spin to sell it, at least for the first hour.

True, The Little Hours is essentially a one-joke comedy - but most of the jokes under the umbrellas of that one joke are pretty damn, I mean darn, funny.

The strategy works surprisingly well. I liked a lot of writer-director Jeff Baena's picture; it may be a one-joke movie, but I've seen comedies recently that would've killed for that many.

Unfortunately, it takes a while for the film to work its way back up to that level of hilarity.

Baena's love of and respect for history wins the day, and his clearly game actors seal the deal.

There is no way to classify the humor in this film and that's probably what makes it great. [Full Review in Spanish]

The throwback raunch-fest may not be perfect, but it gets bonus points for a high-degree of starting difficulty and for Kate Micucci. Because nothing is so broken that a little Micucci can't fix it.

The Little Hours is a small delight more than a profound must-see but it does offer its share of bawdy fun, wrapped up neatly in the end.

[It] doesn't deliver laughs despite the stellar comedic cast.

Audience Reviews for The Little Hours

This is quite an interesting concept that gets a lot of mileage but is a hit and miss affair. The film starts with a lot of quirky humor but it can't maintain the pacing as it moulds into melodrama. The cast are impressive as they banter without a full script, something I discovered after. I thought the film was going to be slightly better and a potential cult film but it only comes out above average. The biggest lag is waiting for the next zany scene which is either odd or slighly funny. Reilly is one of the funniest in a small but great role for him, he can do so much with so little. I had watched this with recommendations and while it is funny, it just can't keep the momentum the whole way. 10-11-2017.

Man was I ever ready to love The Little Hours. It actually pretty much hadn't even entered my mind that I might not. Unfortunately, that was the case. Don't get me wrong, I'm not saying that The Little Hours is terrible, far from it. It's better than a lot of the American comedies I've watched recently. But overall my experience with the movie would be described more as "interesting" or "different" or maybe even "okay" rather than a flat out "good". I'm always happy to see Aubrey Plaza and Alison Brie getting work (especially outside of things like Mike & Dave Need Wedding Dates or Get Hard respectively), but I was a little disappointed by The Little Hours.

Like a Catholic schoolboys fevered fantasy here is a Python-esque/National Enquirer look under-the-covers, as it were, of a secluded medieval convent. Expect some smiles as the ladies do their all to subvert expectations, brooking their natural inclinations inasmuch as it is possible, which is all that Catholic schoolboys among you dream of. Frequently. In secret. Not quite cult, but certainly in that vein.

A BAD HABIT - My Review of THE LITTLE HOURS (2 1/2 Stars) An anachronistic story about medieval nuns starring Aubrey Plaza, Alison Brie and Kate Micucci? Yes, please! Sprinkle in performances by Molly Shannon, John C. Reilly, Dave Franco, Fred Armisen, Nick Offerman, Jemima Kirke, Adam Pally, and the sublime Lauren Weedman from LOOKING? Sign me up! And then the movie plays out and.....PFFFFFFTTTTTT! What happened to this movie? Writer/director Jeff Baena (LIFE AFTER BETH), in an honorable attempt to give us a mashup of John Waters' shaggy, subversive DESPERATE LIVING and any number of Mel Brooks' comedies, delivers a fun concept and an expert cast, but falls terribly flat when it comes to jokes and forward momentum. Our starring triad play nuns in the Middle Ages who suffer no fools. They hurl expletives at the help with a surprising, and surprisingly hilarious, viciousness. Aubrey Plaza in particular has no right to ever be in a period piece, and most of the film's humor capitalizes on this fact. I'm a sucker for her deadpan style, so I found myself laughing often enough even when not much seemed to be happening. Franco plays the newly hired hand, Massetto, after the nuns scare the prior one away. Massetto has escaped certain death by the hands of the King (Offerman) when caught sleeping with his wife (Weedman). I could have used a good 10 more scenes with Offerman and Weedman, as they completely and wonderfully understood what movie they're in, delivering slightly off-putting, delectable performances. When he arrives at the convent, he must pretend to be deaf and mute to put a lid on temptation lest he blow his cover. From there, things devolve, unleashing a pansexual frenzy and then...well, the movie kinda just ends. Fred Armisen shows up late in the game to deliver a master class in annoying comedy (I mean that as a high compliment), but by then, I was so tired from not laughing nearly as much as I had hoped. I've struggled trying to put my finger on what went wrong. This isn't a case where there was no script and the filmmaker hoped his wildly talented actors would just make things work. Baena clearly has a vision, a slightly flat, unpretentious look at the dark underbelly of religion. While Plaza shines, Alison Brie has very little to play and Micucci's wide eyes make just the sight of her in a tight habit a visual joke. Obviously low budget, the whole production seems to relish in its "let's put on a show" qualities. It's going for the droll tone of WET HOT AMERICAN SUMMER and perhaps SNL's Kyle Mooney's truly funny, anti-humor videos. Adding Borscht-Belt rat-a-tat jokes would have upset the balance, but we're left with something strange, something occasionally funny, but in the end, truly forgettable.