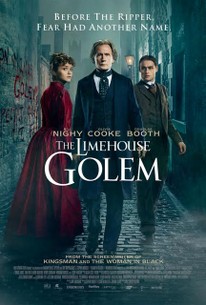 The city of London is gripped with fear as a serial killer - dubbed The Limehouse Golem - is on the loose and leaving cryptic messages written in his victim's blood. With few leads and increasing public pressure, Scotland Yard assigns the case to Inspector Kildare (Bill Nighy) - a seasoned detective with a troubled past and a sneaking suspicion he's being set up to fail. Faced with a long list of suspects, including music hall star Dan Leno (Douglas Booth), Kildare must get help from a witness who has legal troubles of her own (Olivia Cooke), so he can stop the murders and bring the killer to justice.

News & Interviews for The Limehouse Golem

New On DVD in November: Westworld, Atomic Blonde, Logan Lucky and More
It Is Certified Fresh

View All The Limehouse Golem News

Critic Reviews for The Limehouse Golem

It translates novelist Peter Ackroyd's densely historical and cerebral foray into the horror genre into an entertainment, without being weighed down by Ackroyd's numerous fascinating but imaginative layers and tangents.

... this nasty little Victorian London horror film has more than a few blood-soaked charms of its own.

A Victorian-era gothic stew that, although perhaps not as ultimately satisfying as it might have been, nevertheless provides for an unsettling two hours.

Adequate as comfort food, but fails as anything else.

For those in the mood for a strong dose of ghastly-by-gaslight horror - and you know who you are, luv - "The Limehouse Golem" is good for what ails you.

Surprisingly, and thankfully, Limehouse Golem ends up becoming the film you didn't know you wanted yet are so glad to have received. It's perfectly pitched, with a tongue ever-so-slightly in cheek.

The murders are gruesome and artful and production design is top-notch, but we'd trade some of it in a heartbeat for a little less "golem" and a little more living, breathing soul in the script.

Riotous and gory fun, with some truly pantomime performances thrown in for good measure. It's just a pity that the story itself isn't quite as clever as it would have you first believe.

Louise Burrell
One Room With A View

A Victorian thriller with rather heavy echoes of Jack the Ripper, this film struggles to rise above the murky atmosphere it weaves. And the plot itself is as dense as the low-lying London fog.

The feminist critique is present in the dialogue and narrative structure, but it hardly feels integrated into the performances or the images. For all that Medina does with it, The Limehouse Golem might just as well have stayed on the page.

The major problem lies with the story's all-too playful tone which diminishes the story's impact and the film's overall lack of originality.

Audience Reviews for The Limehouse Golem

I did enjoy the delightful dialogue and solid performances, but this Victorian-era detective story tries so hard to be smart and surprising (with an "unexpected" big twist in the end) that it doesn't realize how predictable it is in its baffling stupidity.