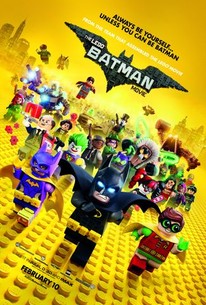 Critics Consensus: The Lego Batman Movie continues its block-buster franchise's winning streak with another round of dizzyingly funny -- and beautifully animated -- family-friendly mayhem.

Critics Consensus: The Lego Batman Movie continues its block-buster franchise's winning streak with another round of dizzyingly funny -- and beautifully animated -- family-friendly mayhem.

Critic Consensus: The Lego Batman Movie continues its block-buster franchise's winning streak with another round of dizzyingly funny -- and beautifully animated -- family-friendly mayhem.

In the irreverent spirit of fun that made "The LEGO (R) Movie" a worldwide phenomenon, the self-described leading man of that ensemble - LEGO Batman - stars in his own big-screen adventure: "The LEGO (R) Batman Movie." But there are big changes brewing in Gotham, and if he wants to save the city from The Joker's hostile takeover, Batman may have to drop the lone vigilante thing, try to work with others and maybe, just maybe, learn to lighten up.

Will Arnett
as Batman/Bruce Wayne

Zach Galifianakis
as The Joker

Conan O'Brien
as The Riddler

Adam DeVine
as The Flash

Alfred Vs. Alfred: How Pennyworth’s Jack Bannon Measures Up Against Previous On-Screen Versions of Batman’s Butler
Teen Titans Go! To the Movies Is Clever, Colorful Fun for the Whole Family
Character Face-Off: The Best Version of 15 Mega Popular Movie and TV Characters

Emotion can reside in the unlikeliest packages. But there's not a lot of it on show here. The animation, however, is terrific and fans of the original should love it.

What's missing is any trace of 1980s-style punk cynicism to underpin the pop playfulness; instead, there's a complacency which is death to humour.

The Lego Batman Movie works precisely because it knows audiences are sick of its hero. It's a reassessment, an intervention, an effort to try and remember what's fun about him.

The sequel of sorts... is not quite as good, but at its best, it has the same whiplash wit and inspired freneticism.

The thing about a sequel or a spinoff, even a mostly fun one like The LEGO Batman Movie, is that it's hard to recreate enthusiasm and inventiveness. What was once new is now, already, routine.

The Lego Batman Movie isn't just a superhero story; it's a crash course in what makes a superhero story. And most of it is fairly insightful, humorous, and/or well observed -- clearly from the mind of die-hard comic book aficionados.

The Lego Batman Movie is fun (and funny), but not quite as awesome as its predecessor.

It would all be lightweight and completely disposable it if weren't for the bits of stunning animation that pop up every five minutes or so. The visual inventiveness of LEGO Batman far surpasses anything the DC franchise has produced.

The kind of irreverent superhero movie master-built to keep both the kids and their parental guardians as happy as each other.

Fun for kids, but mostly forgettable for everyone else, it's possible to have a good time with The LEGO Batman Movie, but don't expect it to replace Tim Burton or Christopher Nolan's efforts as your favourite movie starring The Dark Knight.

Not only is "The Lego Batman Movie" another immaculately crafted and highly entertaining bit of cross promotion that has no right being as good as it is; it also truly gets the "Batman" mythology and sends up "The Caped Crusader" is effortlessly hilarious and creative fashion. It may not reach the level of "The Lego Movie's" existential twist, and you may need to do a little Bat Research in order to get the most out of it's endless Easter Eggs, but "The Lego Batman Movie" is a worthy follow-up that's wacky, irreverent fun and the best Batman flick this side of Nolan!

Not as clever and neatly written as the original Lego Movie, but retains the same style of charm, humor and animation that made it great. The drama and emotion portrayed was all overly contrive though, it's just too mechanically written to make ends meet for Batman's character progression. This wouldn't be such a glaring fault if it were not pivotal to the story's plot. I hope this isn't an example of Lego movies to come, there are signs of lazy, formulaic production that squander the creative genius of the original. Without these comparisons Lego Batman is certainly acceptable family entertainment, but where do we draw the line and accept that this franchise is aiming to be good, when it could be great?

The Lego Batman Movie is first and foremost about the Caped Crusader. He's once again articulated by Will Arnett. His absurd rendition stands in stark contrast to the dark and brooding iterations of the cinematic adaptations since 1989. Nevertheless, his goofy performance ranks up there with the very best. It's a clever choice that his Arrested Development co-star Michael Cera voices Robin. The cast is spirited. Rosario Dawson is the new police commissioner, Barbara Gordon. Ralph Fiennes is Bruce Wayne's loyal butler. Zach Galifianakis is the Joker. Even Mariah Carey plays a character. The whole production is agreeable fun. If there's a quibble, it's that the story is merely a perfunctory excuse to make wisecracks. Even as the narrative sags in the 2nd half, the action continues to zoom forward in an increasingly eccentric fashion. It plays for 15 minutes too long. Still, there are enough left-field references and rapid-fire gags to entertain. In fact, it's tough to catch them all the first time around. I just might be willing to see it a second time. fastfilmreviews.com