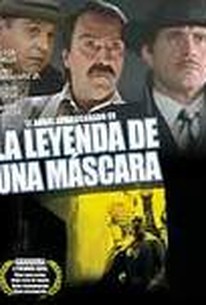 El Angel Enmascarado was found dead in his mansion, and reporter Olmo Robles has been given the task of finding out what happened to the famous (and wealthy) wrestler -- including the wrestler's true identity, which has remained hidden from the beginning. This takes him into the wrestler's past and the vast, gritty world of wannabe wrestlers and hangers-on, seedy nightclubs, and underworld types. Why did El Angel give up his identity as a young man? A lot of people don't want Olmo to find out, and he receives several serious attacks intended as warnings. This film-noir detective movie/comedy is also an affectionate spoof of Mexican wrestling films of the 1950s and '60s, and will probably be best appreciated by those familiar with the genre.

Critic Reviews for The Legend of the Mask

There are no critic reviews yet for The Legend of the Mask. Keep checking Rotten Tomatoes for updates!

Audience Reviews for The Legend of the Mask

There are no featured audience reviews yet. Click the link below to see what others say about The Legend of the Mask!

The Legend of the Mask Quotes