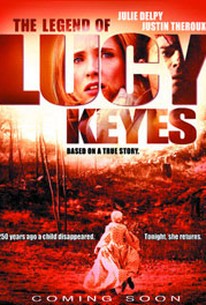 The Legend of Lucy Keyes Photos

One family comes face-to-face with the forces of the unknown in this supernatural thriller based on actual events. On April 14, 1755, something terrible happened to Lucy Keyes in the forest surrounding Wachusett Mountain. 250 years later, Guy (Justin Theroux) and Joanne Cooley (Julie Delpy) move their family into an 18th century farmhouse at the foot of the mountain to escape the city, and recover from the death of their youngest child to SIDS. It seemed like the perfect place to get a fresh start and raise their two young daughters Molly and Lucy. Upon discovering that the Keyes family had occupied the farmhouse at the time of their daughter's death, Joanne begins having strange dreams, and hearing haunting cries coming from the woods. After finding a letter admitting to the murder of Lucy Keyes, Joanne becomes convinced that Martha and Lucy Keyes' spirits are attempting to contact her in hopes that she can set them free from their earthly limbo, and begins to fear that their grieving mother plans to claim Lucy Cooley as a substitute for her own missing daughter. As Guy attempts to convince the townspeople to approve construction of a wind farm project that he's currently working on, his wife's sanity begins to slip and their marriage starts to falter. Joanne's attempt to expose the truth about Lucy Keyes' disappearance only leads to greater terror, however, when the townspeople turn on the family, and young Lucy Cooley vanishes into the woods one cold and windy night.

Critic Reviews for The Legend of Lucy Keyes

Too routine to stir up much energy or portent about the present-day impact of the mysterious disappearance in 1755 Princeton, Mass.

A standard setup that unfolds with lukewarm results.

Audience Reviews for The Legend of Lucy Keyes

This part true, part ghost story is a weak drama that tried to be a thriller but didn't make it out of the gate. Although the Legend of Lucy Keyes is an interesting tale, it's probably better told around a camp fire instead of on film. ;)

Extremely lame. Really expected more from Julie Delpy. I guess it's okay to watch once on tv, but sure wouldn't watch it again.

I thought this movie was pretty boring, bland, bad. There was nothing to make it stand out among the endless packs of movies that are exactly like this one. I like Julie Delpy as an actress though so this movie gets two stars mostly cause of her.

The Legend of Lucy Keyes Quotes