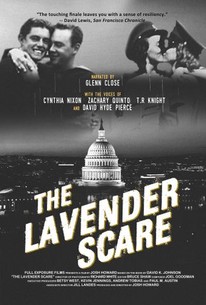 With the United States gripped in the panic of the 1950s Cold War, President Dwight D. Eisenhower deems homosexuals to be "security risks" and vows to rid the federal government of all employees discovered to be gay or lesbian. Tens of thousands lose their jobs. But the mass firings have an unintended effect: they stir outrage in the gay community and thrust an unlikely hero into the forefront of the LGBTQ rights movement. In addition to illuminating a little-known chapter of American history, The Lavender Scare is a timely reminder of the value of vigilance and social action when civil liberties are under attack.

Critic Reviews for The Lavender Scare

It's inspiring and humbling at once to see how change can be made, even by a small group of people, no matter how slowly.

[An] essential and absorbing documentary about the political repression of homosexuality in America...

A wealth of archival footage and stills, candid chats with victims of this harrowing era plus effective voiceovers... combine for a vivid, disturbing and rousing picture of specious government intrusion at its worst.

A stirring depiction of gay travails during [the Cold War] that's as shocking as it is illuminating.

This powerful doc is sadly all too relevant.

Much credit goes...to the doc's editors and researchers who unearthed and effectively organized so much material into a chilling, thrilling true story.

This is well-intended, but repetitive and kind of fragmented.

This moment in history, long relegated to being a mere footnote (if mentioned at all), can now finally become part of the conversation on LGBT rights - let's make sure we don't forget it again.

The Lavender Scare is a decent intro to a pivotal part of gay rights movement.

Spend an hour with The Lavender Scare and you'll learn why the LGBTQ+ community fights so hard for equal rights, and how hard it has been to foster change.

"The Lavender Scare" is quite chilling as it illustrates these horrifying moments in U.S. history. But Howard offers moments of optimism.

There are no featured reviews for The Lavender Scare at this time.