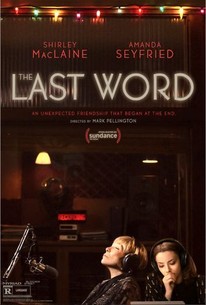 Shirley MacLaine is Harriet Lauler, a once successful businesswoman in tight control of every aspect of her life. As she reflects upon her accomplishments, she's suddenly inspired to engage a young local writer, Anne Sherman (Amanda Seyfried), to pen her life's story. When the initial result doesn't meet Harriet's high expectations, she sets out to reshape the way she is remembered, with Anne dragged along as an unwilling accomplice. As the journey unfolds, the two women develop a unique bond which alters not only Harriet's legacy, but also Anne's future.

Yvette Freeman
as Housekeeper
View All

News & Interviews for The Last Word

On DVD This Week: Beauty and the Beast, A United Kingdom, and More
Logan Is Certified Fresh

View All The Last Word News

This is a curious mix of The Blind Side, High Fidelity and A Christmas Carol.

A bracingly cynical set-up is slightly betrayed by a treacly ending, but redeemed by the cast, especially the watchable Seyfried and MacLaine, who has the same glint in her eyes that she had in 1960 in The Apartment.

This isn't a very distinguished film but it's likely to be remembered for its central performance.

Here is a horrendous Niagara of syrupy nonsense: sentimental, cliched and humourless.

You won't believe a single minute of it, but you might, despite better judgement, find yourself caring by the end.

The occasionally retired Ms. MacLaine is ever quick with a retort, but this is one lead-footed comeback we all could have done without.

You could do better this weekend, but you could do a whole lot worse.

You'll laugh. You'll cry. The Last Word speaks from the heart with the last word on life and legacy - Love.

This is an absolute hoot and also offers inspiring insights on life, taking risks, and changing for the better.

Although the movie doesn't exactly have much of an original voice, it still has a very big heart.

It might take a little bit of extra effort to find The Last Word, but the cinematic experience and Maclaine's wonderful performance is well worth the journey.

The Last Word is fairly generic movie where practically everything is preordained by the subgenre's convention.

Audience Reviews for The Last Word