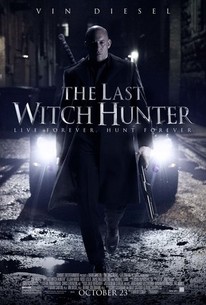 Critics Consensus: Grim, plodding, and an overall ill fit for Vin Diesel's particular charms, The Last Witch Hunter will bore and/or confuse all but the least demanding action-fantasy fans.

Critics Consensus: Grim, plodding, and an overall ill fit for Vin Diesel's particular charms, The Last Witch Hunter will bore and/or confuse all but the least demanding action-fantasy fans.

Critic Consensus: Grim, plodding, and an overall ill fit for Vin Diesel's particular charms, The Last Witch Hunter will bore and/or confuse all but the least demanding action-fantasy fans.

The modern world holds many secrets, but the most astounding secret of all is that witches still live amongst us; vicious supernatural creatures intent on unleashing the Black Death upon the world. Armies of witch hunters battled the unnatural enemy across the globe for centuries, including KAULDER, a valiant warrior who managed to slay the all-powerful QUEEN WITCH, decimating her followers in the process. In the moments right before her death, the QUEEN curses KAULDER with her own immortality, forever separating him from his beloved wife and daughter in the afterlife. Today KAULDER is the only one of his kind remaining, and has spent centuries hunting down rogue witches, all the while yearning for his long-lost loved ones. However, unbeknownst to KAULDER, the QUEEN WITCH is resurrected and seeks revenge on her killer causing an epic battle that will determine the survival of the human race. (C) Summit

Jackson Frazer
as Boy On Plane

Michael Halsey
as Grosette
View All

Parental Guidance: How Family-Friendly Are Pride and Prejudice and Zombies and Hail, Caesar!?
On DVD This Week: Bridge of Spies, Suffragette, Show Me a Hero, and More
Box Office: Halloween Weekend Scares Off Movie-Goers

It is terrible. It is fabulously entertaining.

Like that other witch hunter movie, "Hansel and Gretel: Witch Hunters," this is a film that is completely looney tunes, and it only half knows it.

The Last Witch Hunter starts off with traces of sly humour, but gradually collapses into a unwieldy combination of special effects confrontations and ponderous exposition.

Unfortunately, a film needs more than Diesel's Stallone-ish appeal to succeed and that's where The Last Witch Hunter is found lacking.

Most will find this a rather too brassy affair, handicapped by incontinent plotting. But there are probably just enough references to shape shifters, dream walkers and secret brotherhoods to keep the geeks happy.

The Last Witch Hunter is so drenched in CGI effects, it looks as if it's been dunked in a vat of lacquer.

The Last Witch Hunter is a bland attempt at franchise filmmaking. It's not entirely dull, but there's very little about it that's exciting, either.

Gonzo fantasy adventure in an over the top way you rarely encounter anymore.

The best thing that one can say about The Last Witch Hunter is that it's original. It's still crap, but at least you've never seen crap quite like this before.

As an exercise in D&D-like world building, The Last Witch Hunter largely succeeds. But as an engaging action movie, it falters.

The real sinful hex at large that some unsuspecting moviegoers will ultimately suffer is succumbing to the laughable supernatural spell that The Last Witch Hunter will cast in insufferable, confusing fashion.

For a movie about an immortal bald man killing witches in modern day New York, it still feels far too bland.

"The Last Witch Hunter" is clearly lost in the woods. The film has the bling: sexy stars, super visuals, energetic sound track, and a lot of exciting action. But other than that, it lacks substance: a confusing script paired with sub-par acting make for a confusing, messy witches' brew. No performer is good other than Caine, and possibly Englebrecht, and it is undoubtedly the worst performance Elijah Wood has had the misfortune of committing to celluloid. If you're looking for stupid, stylish action fun, this is an okay movie -- but otherwise, it culls the bottom of the cauldron.

Going into this I thought this was no more than a blatant cash grab some druggie kid might perpetrate at the 7-11 the next town over. Then I saw Michael Caine. I reconsidered. But, after watching the film, I saw that I was right at the first. No surprises here. Not a one. But still, in this genre, at least not terrible.

Vin Diesel takes the leading role in this slapdash, bland, and incomprehensible cheese-fest. After the witch hunters are wiped clean from existence, Kaulder (Diesel) was spared at the cost that he never parish. 800 years later, we pick up with his character in New York City as he discovers that witches are living among him, all of them might not be bad, and one may even have a affection for him. Vin Diesel claims this film to be an original, but sadly, aside from this cast being together and this specific tale being told, it is one of the most unoriginal films of the year. "The Last Witch Hunter" squanders it's cast by pulling out every bit of performance in extended dialogue driven scenes that leaves not much room for the suspense or action of the film. In the end, "The Last Witch Hunter" is not a terrible film in general, but it is too cheesy, too slow, and too lazily written. This is an unexciting mess.