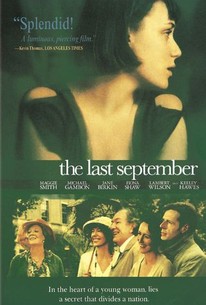 The portrait of an end of an era--British rule in Ireland--and the demise of a class and way of life which had survived for centuries. A depiction of a young woman's coming of age in a brutalized time and place, the story is set in 1920 in County Cork, southern Ireland at the country home of Sir Richard Naylor and his wife, Lady Myra. The Naylors belong to the class of Anglo-Irish aristocracy known as the Ascendancy, whose way of life--moneyed, graceful, essentially feudal--is fast coming to a close. Behind the facade of set-piece dinners, tennis parties and army camp dances, all know that the end is approaching. When Sir Richard's niece, Lois, who is being courted by a captain in the British army, is lured by a menacingly playful and violent young man hiding on the Danielstown estate, class tensions arise and a fierce struggle for personal freedom ensues.

Maeve Kearney
as Maid No. 1

Francine Mulrooney
as Maid No. 2

Christina Wilson
as Maid No. 3
View All

Critic Reviews for The Last September

I'm not sure the movie should have pumped up the melodrama to get us more interested, but something might have helped.

Expends so much effort looking good and creating a dreamy atmosphere that its makers seem not to care about maintaining narrative coherence or building emotional resonance.

An entrancing film about yearning.

Although intelligent, fails to truly grip the viewer.

Beautifully filmed, "Last September" has the feeling of an impressionistic painting.

Anyone seeking a low-key blend of the personal and the political need search no further than this gently photographed fable.

Audience Reviews for The Last September

Just moody and a bit messy. It could have been interesting and some of the actors made it worth checking out but it was pretty badly executed.

Such a good cast, such a dull movie!!