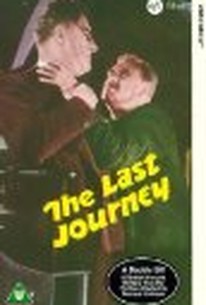 The "Grand Hotel" format was mixed with elements from the popular railroad melodramas Rome Express and The Ghost Train in the British The Last Journey. The scene is a speeding passenger train, peopled by the usual polyglot of commuters. There's a pair of pickpockets, a detective in pursuit of those crooks, an eloping couple, a jilted suitor, a whining sourpuss, and so on and so forth. What none of these worthies know is that their ride may well be their last on Earth: The crazed engineer (Julien Mitchell), forced into retirement, intends to kill himself and his passengers by crashing the train. Fortunately, there's yet another passenger on this particular journey: A psychoanalyst (Godfrey Tearle), who anxiously tries to persuade Mitchell to give up his suicidal intentions before it's too late. ~ Hal Erickson, Rovi

Godfrey Tearle
as The Specialist

Hugh Williams
as The Man

Judy Gunn
as The Girl

Julien Mitchell
as The Driver

Olga Lindo
as The Wife

Michael Hogan
as The Fireman

Frank Pettingell
as The Drunk

Eliot Makeham
as The Light-fingered Gentleman

Eve Gray
as The Light-fingered Lady

Sydney Fairbrother
as The Crank

Sam Wilkinson
as The Stutterer

Anthony Nelson Keys
as The Frenchman

Viola Compton
as The Chatterer

John Lloyd
as The Steward
View All

Critic Reviews for The Last Journey

Suspense is well-maintained and the climax is thrilling. The acting generally is on a high level though opportunities in this type of plot are obviously limited. The direction is skillful and imaginative and the camera work is good.

There are no featured reviews for The Last Journey at this time.