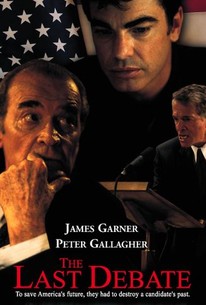 The fine line between reporters objectively covering a political campaign and attempting to sway its outcome is explored in this made-for-cable drama based on the novel by noted television journalist Jim Lehrer. Newspaper columnist Mike Howley (James Garner) is asked to moderate a nationally televised debate between two presidential candidates. In collusion with fellow newspeople and debate panelists Barbara Manning (Audra McDonald), Henry Ramirez (Marco Sanchez), and Joan Naylor (Donna Murphy), Howley formulates a plan to boost the campaign of the Democratic candidate, whom they favor. They ask the Republican nominee a number of pointed questions about unsubstantiated charges that he has a propensity for violence, eventually prompting the candidate to leave the stage in a huff after throwing a microphone. Several weeks later, the Democrat carries the election. While the debate served the goals of the reporters, and boosted their public image, some observers have serious questions about what went on, and investigative reporter Tom Chapman (Peter Gallagher) is determined to bring the public the truth. A number of noted journalists and political figures served as consultants for The Last Debate and appear in cameo roles.

Critic Reviews for The Last Debate

John Badham not only does a snappy job of directing The Last Debate but also appears on camera, as the anchor Murphy replaces.

There are no featured reviews for The Last Debate at this time.