The Last Days of American Crime2020 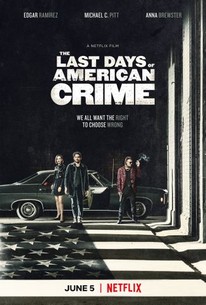 Critics Consensus: This Crime is punishment.

Critics Consensus: This Crime is punishment.

Critic Consensus: This Crime is punishment.

As a final response to terrorism and crime, the U.S. government plans to broadcast a signal making it impossible for anyone to knowingly commit unlawful acts. Graham Bricke (Edgar Ramírez), a career criminal who was never able to hit the big score, teams up with famous gangster progeny Kevin Cash (Michael C. Pitt), and black market hacker Shelby Dupree (Anna Brewster), to commit the heist of the century and the last crime in American history before the signal goes off.

News & Interviews for The Last Days of American Crime

View All The Last Days of American Crime News

Critic Reviews for The Last Days of American Crime

Don't care about story, characters or words, but love violence? Even you will be disappointed.

Yet another insipidly sleazy, lizard-brain shoot-'em-up that through its very dullness demonstrates how rote such ghastly fare has become in our culture.

The filmmakers' ideological muddle reads as cynically opportunistic as any of the actual characters.

A braindead slog that shambles forward like the zombified husk of the heist movie it wants to be, "The Last Days of American Crime" is a death march of clichés that offers nothing to look at and even less to consider.

This is not good action cinema. This is not even good alligator-brain cinema.

Out of touch, brainless and with no idea of how to shoot a good action film, Megaton's film takes a criminal two and a half hours to reach the highlight... the end credits.

The Last Days of American Crime is somehow a worse film than all of those mentioned above; a gratingly self-serious litany of clichés against an uninteresting dystopian backdrop that sticks around for about two hours longer than it should.

There's no moratorium on this subject matter right now, but if you do put this stuff into a movie, it better be good...even the last part of this movie makes the premise even more dumb...

Just not that impressive...and bullets, in these chases, somehow don't break glass? Can't even recommend this...

A mess you just don't care for, and rarely understand...

The bloat on this film can be felt even from the comfort of your bedroom. It's okay for a film to be far-fetched and over the top, but something has to keep it grounded.

There are no featured reviews for The Last Days of American Crime at this time.