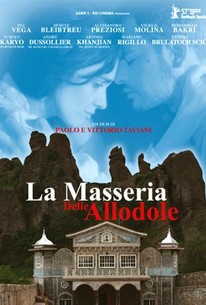 As adapted from the roman by Antonia Arslan and co-directed by legendary Italian brothers Paolo and Vittorio Taviani, The Lark Farm marks one of the few international features to tackle the Armenian genocide head-on. The story (with its thematic parallels, in the early scenes, to De Sica's 1970 Garden of the Finzi-Continis) concerns the Avakian clan. An Armenian family living an affluent lifestyle and periodically shuttling back and forth between their two comfortable homes, the Avakians feel convinced that the rising tide of Turkish hostility on the horizon means little to them and will scarcely affect their day to day. Indeed, The Avakians ignore the warning signs, and set about preparing for a family reunion with the impending visit of two well-to-do sons - landowner Aram, who resides in Turkey, and Assadour, a physician living in Venice. Lo and behold, these illusions come crashing down when a Turkish military regiment crops up at the house, annihilates every male member of the family and forces the ladies to trek off into the Syrian desert, where they will be left to rot. Meanwhile, a handsome Turkish officer (Alessandro Preziosi) falls for Aram's daughter and makes an aggressive attempt to deliver her and her family from certain death, even as the circumstances surrounding him attest to the astounding difficulty of this goal.

Critic Reviews for The Lark Farm

Starring Paz Vega in a role that she doesn't fully understand. [Full review in Spanish]

...the whole thing rarely rises above the level of a glorified soap opera.

Audience Reviews for The Lark Farm

Very dramatic, just like most Italian directed films. If you can get past that, this wasn't all that bad. The subject is a good one to learn about..yet another atrocity of humanity. A decent attempt at a well done film.

Depicting the mass decimation of Armenians by Ottoman Turks in 1915, The Lark Farm genuinely exposes the relationship of identity and violence. The excessive loyalty to identity is the centripetal cause of violence, most evident in human world history. Profound. Piercing.

The Armenian genocide sits at the start of the 20th century's house of horrors, constantly denied by the Turkish government. It has also to my knowledge only been depicted on film a couple of times. In Atom Egoyan's "Ararat," it is in a totally roundabout way in a film within a film. Even now, I'm not sure if he was praising such a film as noble or criticizing it. I was thinking of this while watching "The Lark Farm"(also featuring Arsinee Khanjian) which I accept as basically sincere and principled but pretty much a misfire on a creative level as a prime example of flat and uninspired filmmaking, and lacking any kind of urgency. In trying to narrow its focus down to a single wealthy Armenian family, "The Lark Farm" loses perspective on the atrocity while giving way to some rather cliched subplots including a doomed romance between Armenian Nunik(Paz Vega) and Turkish soldier Egon(Alessandro Preziosi), as the family ignores The Great War.(The film has an international cast apparently thrown together at random. Moritz Bleibtreu putting in an appearance at the eleventh hour playing a Turkish officer only serves to reinforce this.) No matter how far away from the front you are, everybody in a country can feel the effects of war, like deprivations or dead and missing family members. In fact, there is too much reliance on interior shots here, not allowing the viewer to gage the temperature of the country at the time. And instead of moving events along gradually, the film goes straight to the Turkish generals plotting genocide.(That's after a dying grandfather's vision of bloodshed, futilely trying to warn everybody to flee.) This satisfies their need for a scapegoat for everything going badly on the Russian front, compounded by the rise of Turkish nationalism. Of course, not all Turks feel the same way. Colonel Arkan(Andre Dussollier) is conflicted in carrying out his orders, staying away from a party given by his Armenian friends and sending his wife(Enrica Maria Modugno) in his stead. In the end, the best approach would have been to be as straightforward as possible while only implying violence. Perhaps, only use the Italian relatives as a framing device.