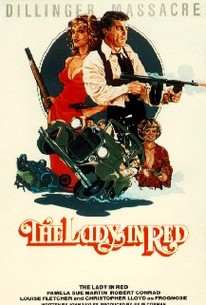 The Lady in Red Photos

Pamela Sue Martin goes through the tortures of the damned as Polly Franklin, a farm gal in the Mid-West of the 1930s, who wants to travel to Hollywood to become a star. Heading off to Chicago, she is waylaid by a series of bad breaks: becoming a badly paid working girl; a prisoner in a women's ward; a woman of the streets; and a Chicago gangster who takes up with the infamous John Dillinger (Robert Conrad).

Critic Reviews for The Lady in Red

'It hurts,' Polly says, after losing her virgnity to a lying cad; this is her defining comment, and a succinct summation of Sayles' judgment on the screwing that much of America takes every day from the people in charge.

This is populist moviemaking, Corman style, courtesy of that old lefty John Sayles.

Audience Reviews for The Lady in Red

There are no featured audience reviews yet. Click the link below to see what others say about The Lady in Red!

The Lady in Red Quotes